The timber lighter Arthur has been abandoned in the middle of Hooe Lake, near Oreston in Plymouth.

According to Langley and Small, the lighter Arthur was owned by Bayly Bartlett timber importers, based at Bayly's Wharf in Oreston. Not fitted with an engine, Arthur was towed around by a small steam tug called Alice, see photo 9.

Arthur is a lighter, an unpowered barge used to transfer cargo to and from transport ships, in this case the cargo was timber. The name lighter comes from 'lighting', an old word for unloading a ship. The vessel is a typical rectangular lighter shape with flat sides, bluff bow and stern and a flat bottom. Towed barges are often fitted with a fixed skeg aft to help them tow in a straight line but Arthur appears to have been fitted with a rudder, possibly to make her more manoeuvrable in the confined waters at the entrance to Hooe Lake. The lighter was partially decked fore and aft, the foredeck mounted the tow point and the aft deck was used by the steersman. A samson post was fitted at each corner of the cargo well and would be used to pull the barge around when manoeuvring in tight spaces. The cargo well was lined at the bottom and sides with ceiling planking.

Very little is recorded about the life of Arthur and the tug Alice. The only noted event we have found so far was that Arthur was used as a Boom Defence Vessel in WW1 between July 1918 and August 1919. Photographs of the lake show that Arthur was abandoned before 1957 and the steamboat beached on the northern shore may be the tug Alice

. Local resident David Hockings has suggested that Arthur was laid up in Hooe Lake in the 1930s as during the recession little or no work could be found for her. When the economic situation improved it was found that  Arthur could not be removed from the mud and she was abandoned. This makes sense as the vessel would not have been moored in the middle of the lake if she was hulked and due to be dismantled, she would have been put closer to the road at the east end of the lake along with the other hulked ships.

In 2015 the University of Birmingham HIT Team

led by Prof. Robert Stone recorded the remains of the Arthur using a DJI Inspire 1 drone to produce a 3D photogrammetric model of the hulk. Video from the drone camera was recorded as it flew around the hull, and then processed offline using the computer program Pix4D to produce the 3D digital model.

The remains of the Arthur lie in the middle of Hooe Lake towards the eastern end with her stern to the east. There is no evidence that the Arthur was anchored in Hooe Lake so may have been deliberately scuttled in her present position at the end of her useful life. It is not known when this vessel was abandoned but she does appear in a photograph of the lake from 1959.

Arthur has been slowly stripped of her hull planking, ceiling planking and decks by people collecting timber and by natural erosion and decay. But the structure of the lighter has remained largely intact and she still looks ship-shaped. The port quarter partially collapsed around 2005 and the bow collapsed sometime between 2016 and 2020, which suggests that the structural strength of the timbers is now not enough to support its own weight and the remainder of the structure will collapse within a few years. As of 2020, the sternpost and most side frames still remain, the two massive deck beams fitted at the forward and aft end of the cargo hold now lie inside the hold having fallen from deck level above. Some remains of the rudder are still in place as are the iron rudder pintles and gudgeons.

This was one of the vessels identified in the book Lost Ships of the West Country by Langley & Small.

From Oreston, take the Lower Saltram road off Plymstock Road then turn right into Kingfisher Way. Follow the road down to the lake and there is a car park at the end. The remains of the Roger can be seen on the south bank of the lake. Take the footpath heading south under the folly and follow it round to the hulk, there is a gap in the bushes where you can walk through to the beach. Alternatively, walk round via the beach but take care as the rocks are slippery. The wreck partially covers at high tide springs so plan a visit to coincide with low water. The foreshore round the bow of the Roger is firm but the stern lies in mud so appropriate footwear is needed.

Nearby hulks include the Belgian trawler Roger

and the two Harbour Launches

Timber, carvel, fitted with a rudder

Abandoned before 1957, partly broken up

The Plymouth and Oreston Timber Company yard covered ten acres of the eastern side of the entrance to Hooe Lake, around into the north side of the lake itself with six acres of foreshore. Timber would be offloaded in the Cattewater, formed into rafts and towed into the Lake. The Oreston yard was used for treating timber with preservatives or impregnating sleepers and telegraph poles with creosote. In 1957 a merger made the company Bayly Bartlett which operated on the site until 1992. 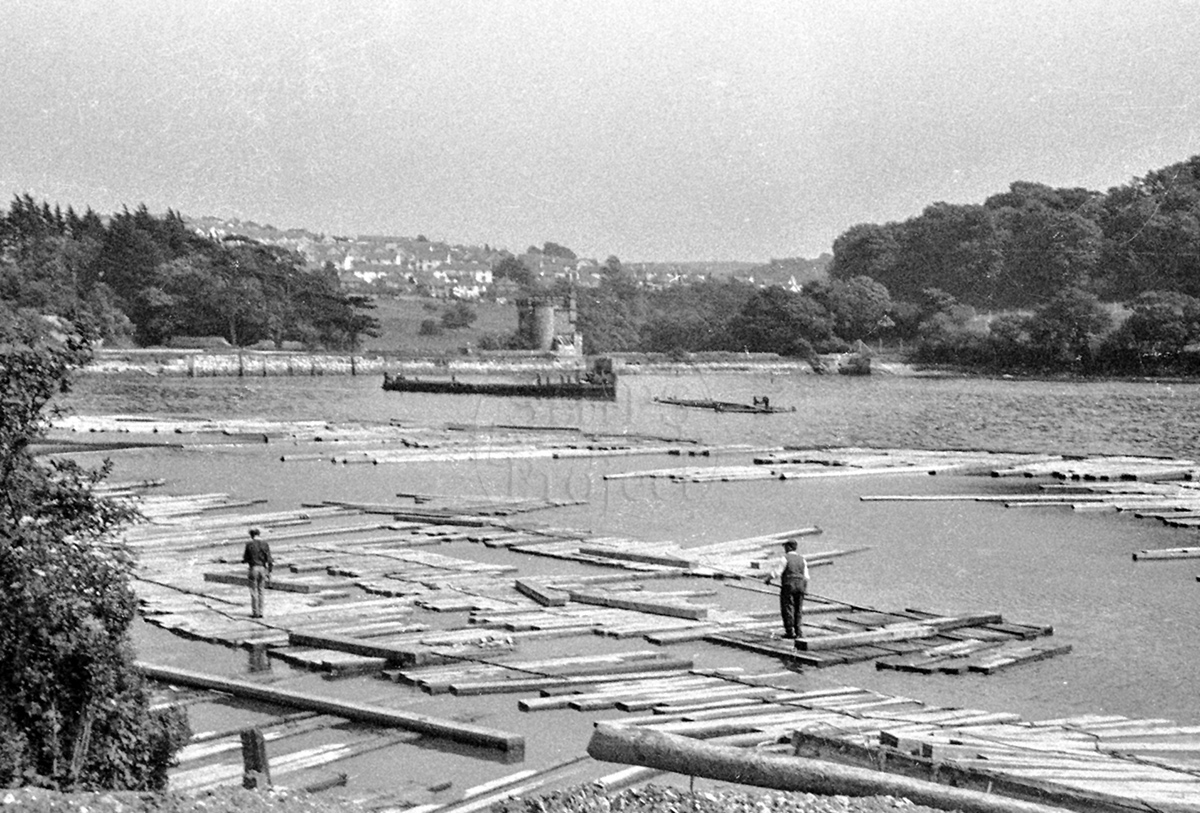 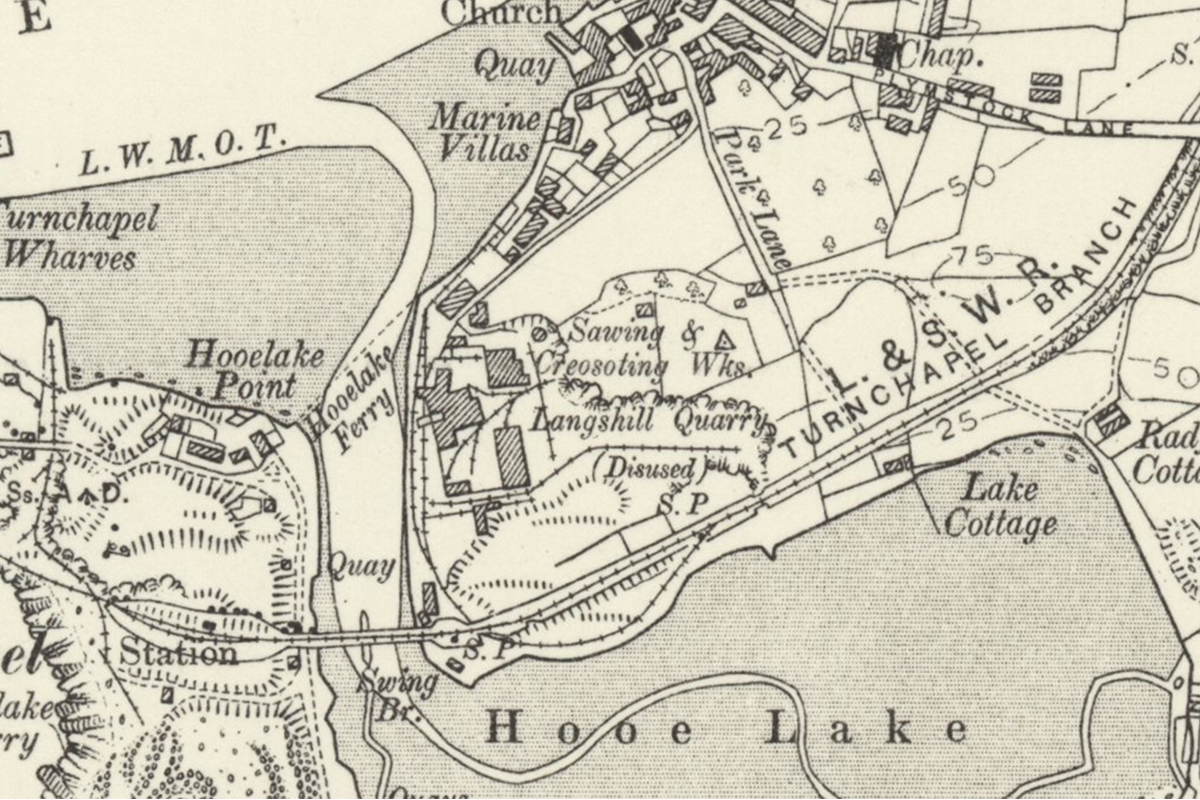 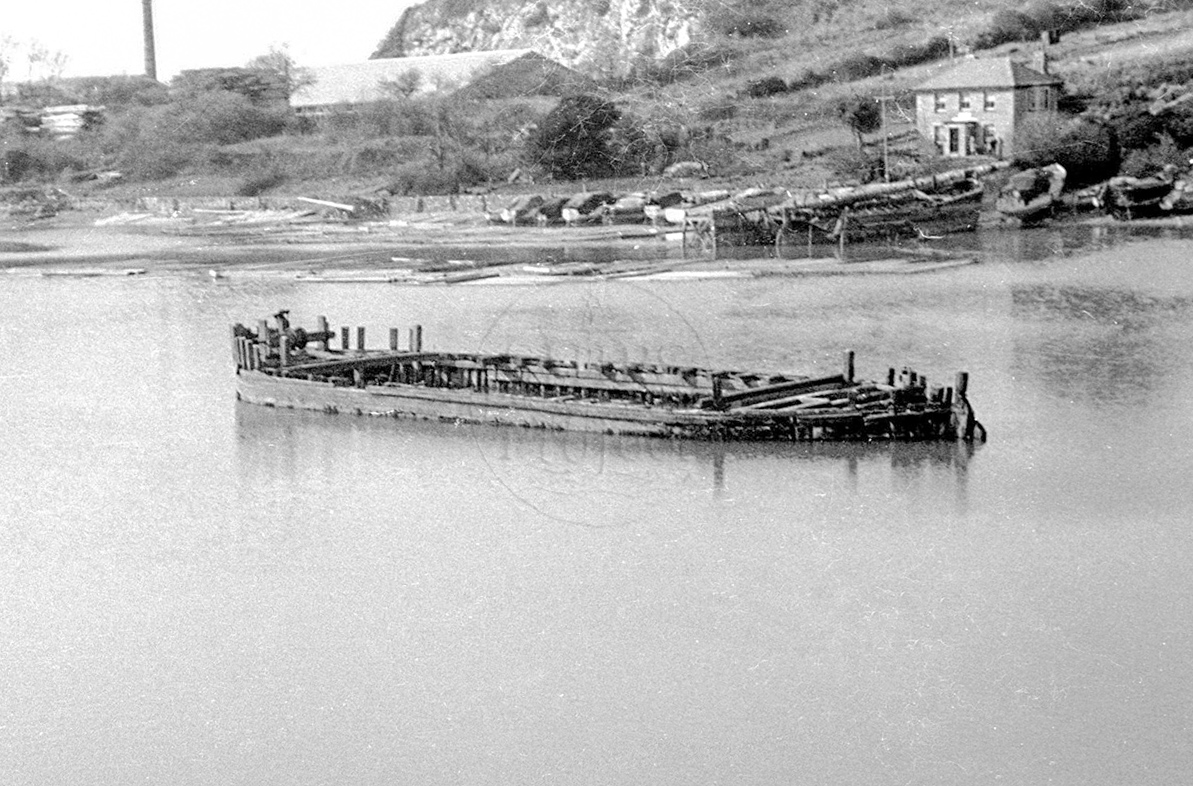 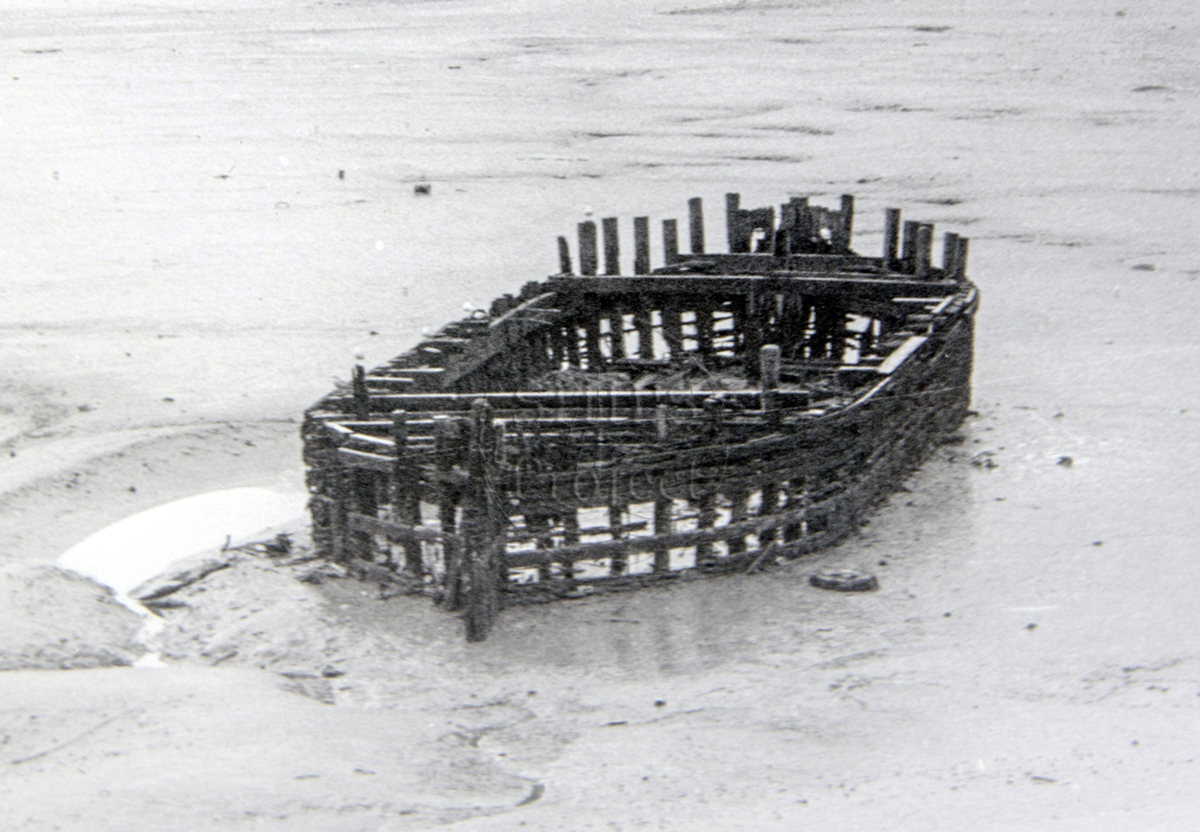 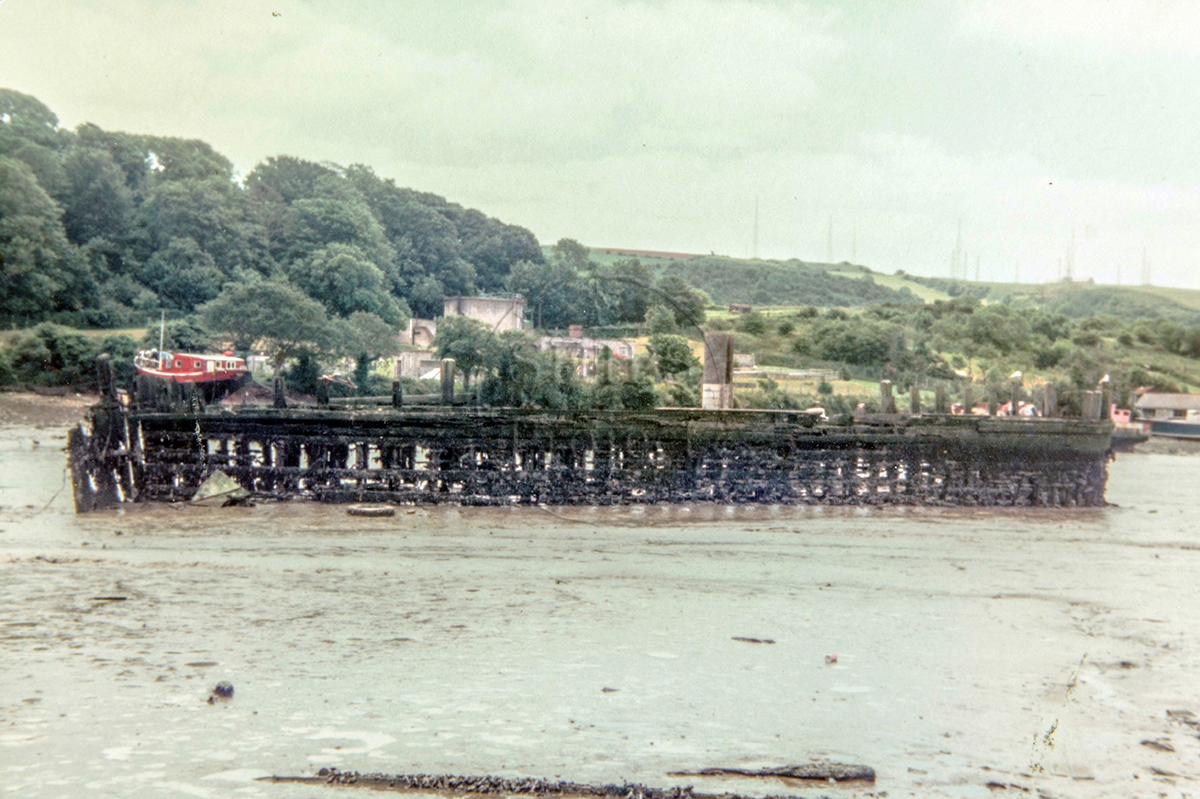 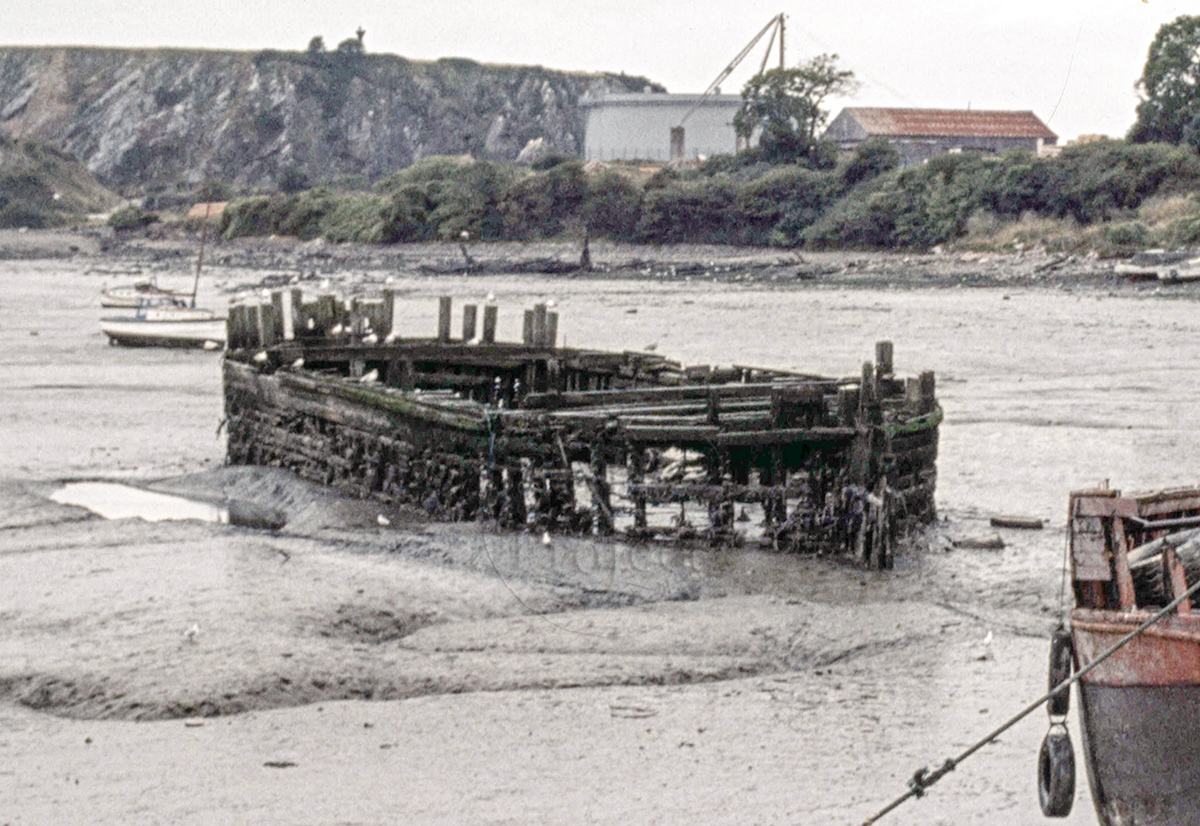 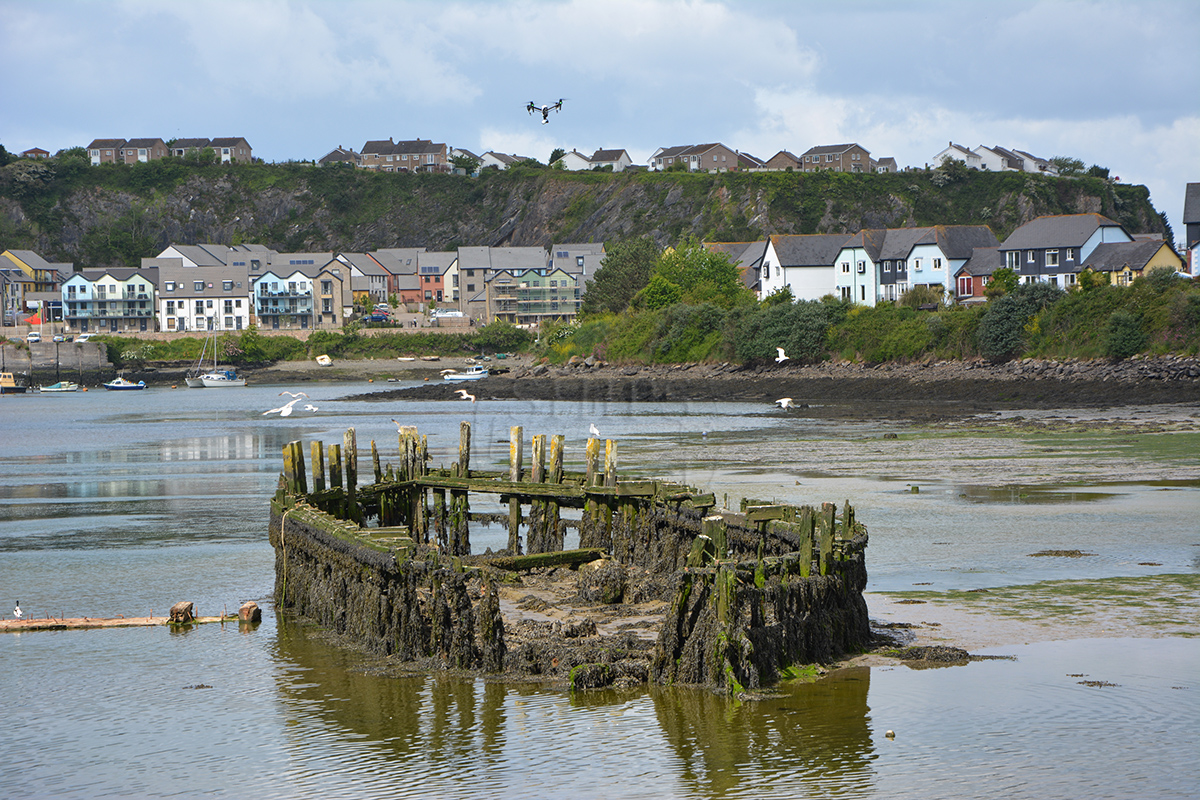 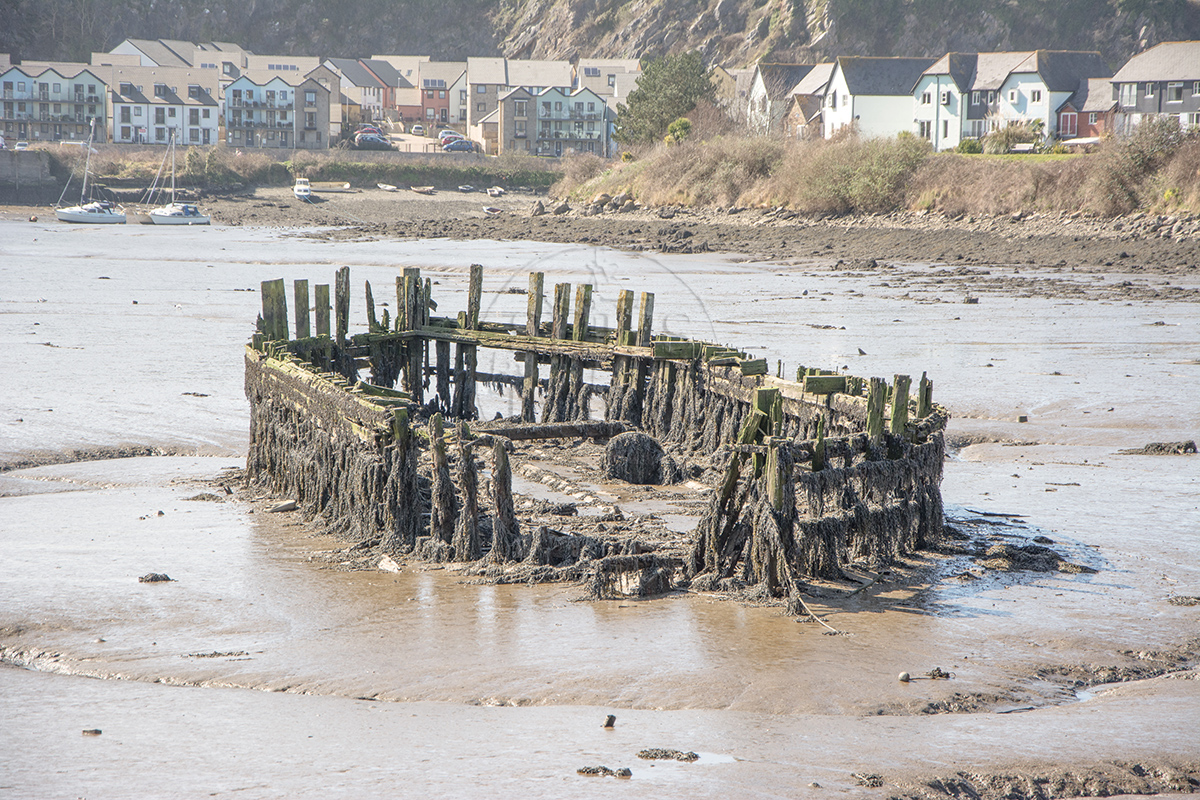 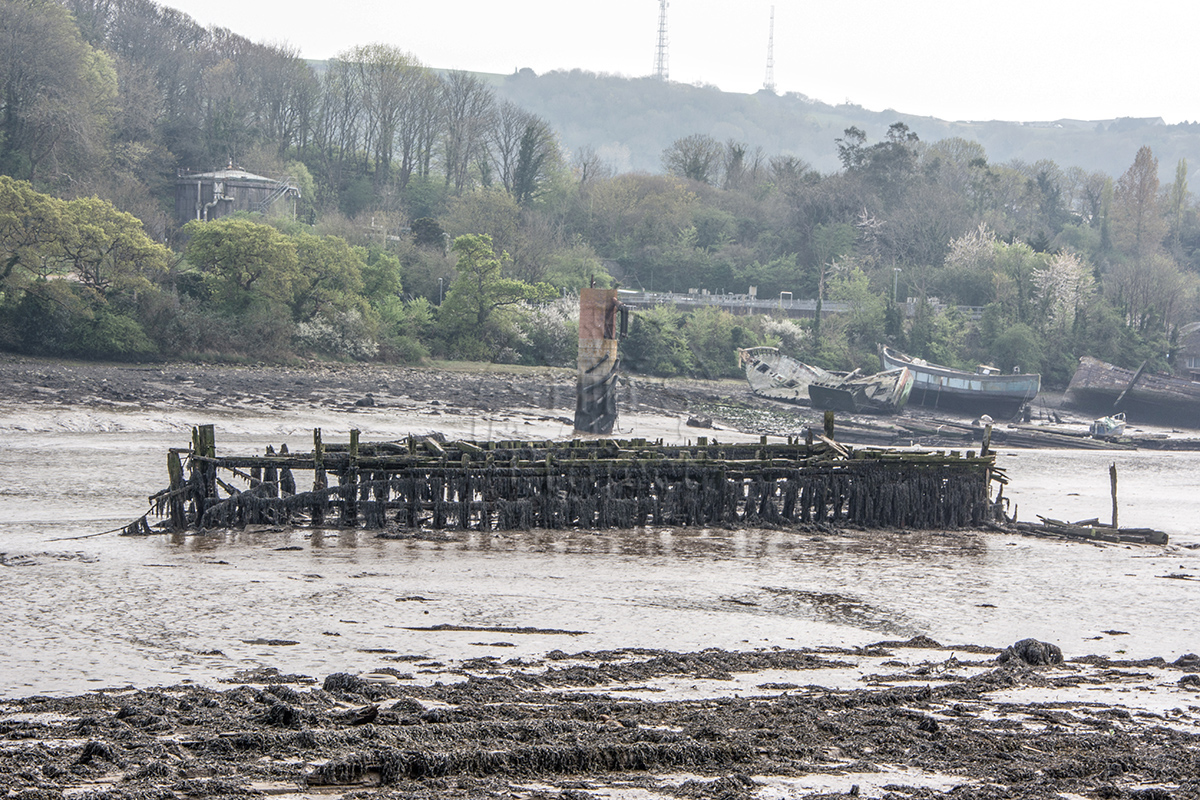 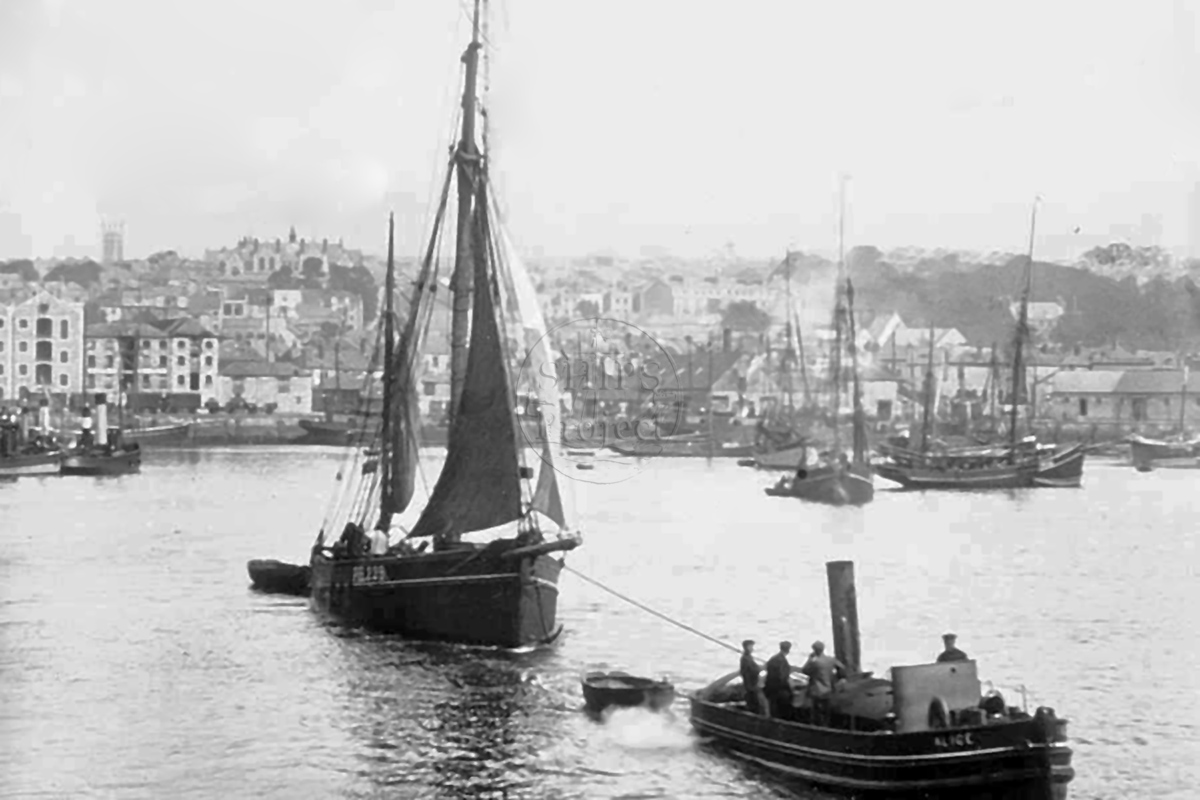