Thames spritsail barge abandoned by the jetty in Hooe Lake

Built in 1901 by Charles Cremer at Faversham in Kent, in the Hollowshore yard at the junction of Oare and Faversham creeks. Cremer built what have been described as 'good looking' barges, Bertie and her sister ship Nellie (ON 114452) of 43 tons in 1901 followed by the Pretoria (ON 114454) of 44 tons in 1902. Bertie was owned by Cremer and she was originally used for freighting bricks, coal, farm fertilisers and timber from London to Faversham and other ports.

The largest class of sailing barges were to be found on the Thames, carrying cargoes of between 80 and 200 tons, yet with a small crew of just two or three to man them. This type of vessel was designed to operate in the shoal waters of the Thames Estuary, a maze of treacherous sandbanks intersected by channels, with the ships carrying large cargoes to provide food, hay and other goods to London. The typical Thames spritsail barge had a large single mast stepped well forward in a mast case on deck which allowed the mast and rig to be lowered and raised quickly. The mast carried a large fore and aft mainsail with its peak (the upper, outer corner) supported by a long spar called a sprit, which crossed the sail diagonally and the lower end was secured at the bottom of the mast. Above the mainsail was the topsail and in front of the mainsail was the foresail. The rig was designed so that it was easy to handle for the small crew, with ropes called brails attached to the mainsail that allowed it to be set and taken in with minimum effort.

The hull was a box shape with flat sides meeting a flat bottom at a sharp angle, which gave the boats a shallow draught which was good for navigating the shallow estuaries around the Thames. With a flat bottom the Thames barges could take the ground without leaning over when the tide went out, and allowed the vessels to be run up on the beach to be loaded or unloaded. The flat bottom also enabled them to carry the maximum cargo yet still float in shallow water. The bow and stern were rounded off with a straight stem and a wide transom, and the vessels were steered by a large rudder designed to work in shallow water. Thames barges could sail empty without having to take on ballast because a pair of leeboards hinged to the sides could be lowered to act as a pair of deep keels to reduce the leeway when unladen. On deck there was a small hatch forward of the single mast, a much larger hatch aft with narrow walkways either side.

During WWII, the barge Bertie was commandeered by the Admiralty for mine watching and barrage balloon duties in the River Thames. With work drying up after the war, both Bertie and Nellie were sold in 1947 with Bertie going to a timber merchant called Mr Harmsworth who converted her to a yacht in a boatyard close to Southampton. Harmsworth had used teak for the built up coamings and furniture on board at a time after the war when teak was hard to come by. Bertie was moored at Hythe and sometime before 1953 was sold to Leslie and Kathleen Savory of Warrington who took her to Kingsbridge in Devon.

In 1954, Bertie was sold to Frank and Constance (Connie) Marcheselli for £600, Frank had done a lot of sailing on the Thames and had always wanted to own a Thames sailing barge. The barge had been laid up for a while unused and when Frank came to start refitting her he found much to be done. Her mainsail had been left brailed up on the sprit and the ochre and oil dressing had gone so hard the sail had to be cut away in sections, and the sprit underneath was found to be rotten and had to be replaced.

Frank moored Bertie alongside Crabshell Quay in Kingsbridge where they lived with their daughter Elizabeth until 1958 when they moved her to Squares Quay on the opposite side of the estuary. At one time the local Council thought a barge was unsuitable accommodation for a small child and did an inspection, but found the boat better fitted out than most houses with a shower, two toilets, a bathroom, central heating, a Rayburn stove, twin teak sinks in the galley, so the case was dropped. The Marchesellis moved Bertie to Frogmore Creek in 1962, to a drying berth close to the bridge, they moved to a house ashore and put the barge up for sale. The new buyers wanted the barge delivered to Plymouth so Bertie was rigged for sea, including setting up the rigging so the mast could be lowered to navigate any bridges on the way. With the assistance of a fishing boat called Princess as a tug, Bertie was taken downriver, headed west to Plymouth and arrived safely at her new berth.

Bertie was operated as a barge yacht until she became unseaworthy, then was bought by Fred Easton in 1966 or 1970 who towed her to Hooe Lake in Plymouth for conversion to a houseboat (Photo 1). Bertie was originally moored bow on to the wall at the east end of the lake (Photos 2, 3, 4). As part of the conversion her mast and leeboards were removed and put on the south shore of the Lake and a deckhouse was built right aft. Bertie was then moved so that she lay across the end of the stone jetty on the north side of Hooe Lake, close to the Dutch barge Two Brothers

. At this point she seems to have been abandoned and by 1980 when John Cotton saw her (Photo 6, 7) she was no longer afloat and was sat on the mud, joined by the two Harbour Launches

. The final fate of the Bertie is unknown, but nothing remains of her now so it is likely that her hull was salvaged for its timber.

The sister ship Nellie was bought by a Mr. Daniels 1950 and later by a Mr. Lapthorn. Nellie was converted to a motor barge in 1952, she was rebuilt at Twickenham in 1985 converted to a stumpy rig in 1996 under her current owner. The Nellie is still afloat, still stumpy-rigged and based on the Blackwater, near Heybridge.

The other sister ship Pretoria was converted in 1964 into a floating restaurant on the Thames in London but has since been broken up, see the video below.

The story of Bertie and her time in Kingsbridge was kindly told to us by Elizabeth Hurrell, née Marcheselli, who was 3 years old when her father Frank bought the barge at Kingsbridge.

This vessel was mentioned in the book Lost Ships of the West Country by Langley & Small.

When last investigated by The SHIPS Project in June 2020, nothing visible remains of the Thames spritsail barge Bertie but her bottom timbers lie just under the mud off the end of the jetty, her stern mixed in with the remains of the two Harbour Launches

From Oreston, take the Lower Saltram road off Plymstock Road then turn right into Kingfisher Way. Follow the road down to the lake and there is a car park at the end; the stone jetty is easily visible on the north shore. The foreshore is firm but further out is deep mud so appropriate footwear and knowledge of the tide is needed.

and the Two Brothers

Abandoned after 1970, broken up

Converting the sister ship Pretoria to a Floating Restaurant

This Pathé archive film tells the story of Thames sailing barge Pretoria which became a restaurant on the River Thames in London in the 1960s. The Pretoria was refitted at Pin Mill on the River Orwell in Suffolk by the Webb family and was set up as a restaurant on the Embankment in London. By 2016, the Pretoria was abandoned in the mud at the Barge Graveyard at Maldon, Essex, along with five other Thames sailing barges. Lying in the Graveyard with Pretoria are the remains of Thames sailing barges British Lion, Vicunia and Mamgu; a lighter; an Admiralty launch, a fishing vessel built in either Scandinavia or Belgium and several other vessels. 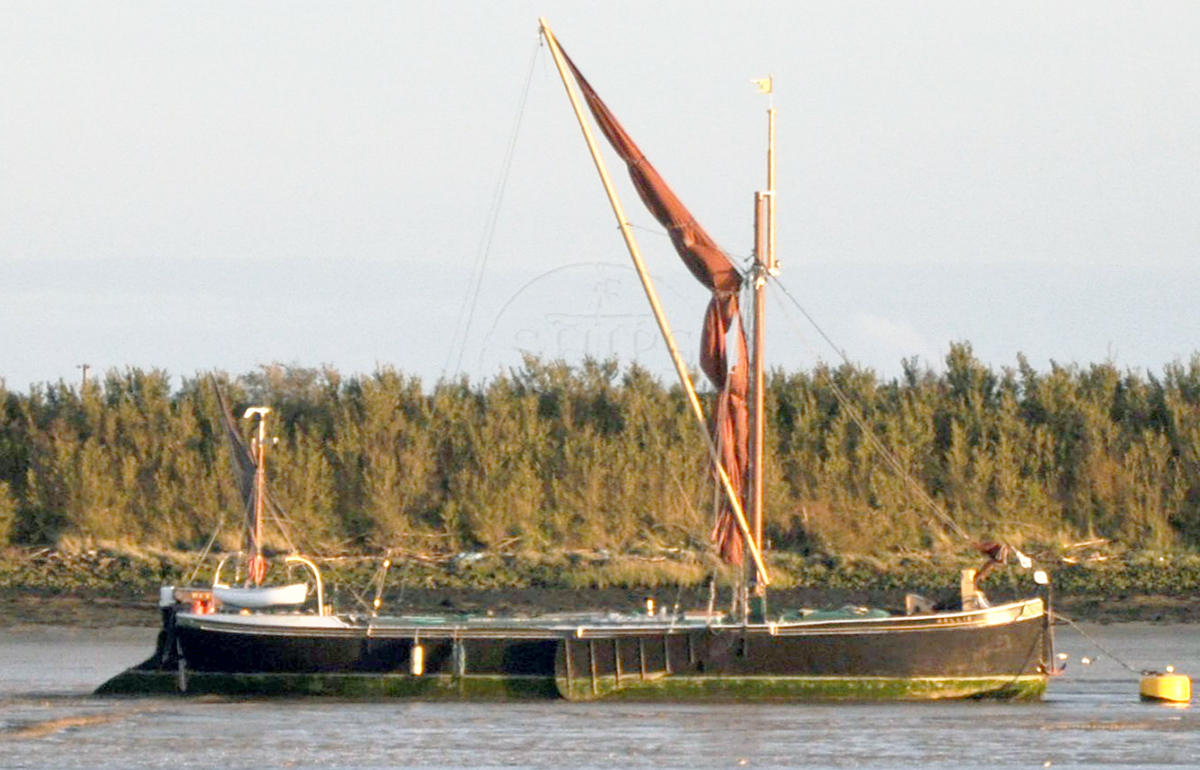 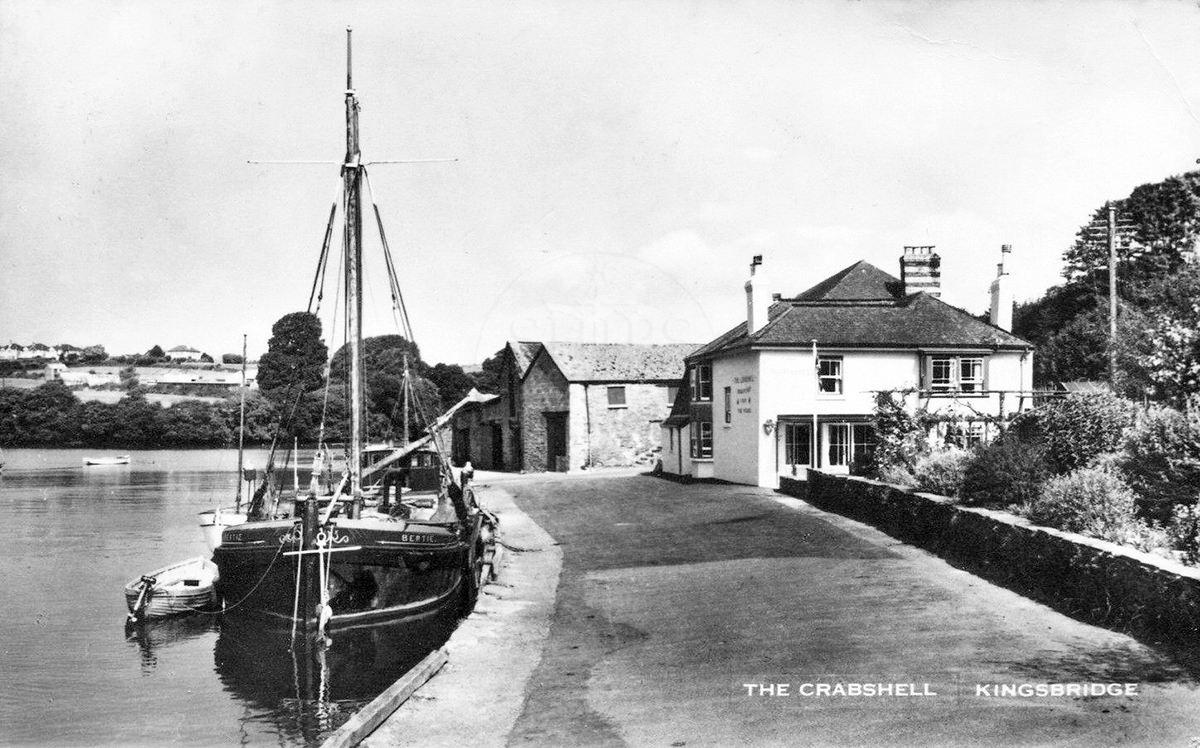 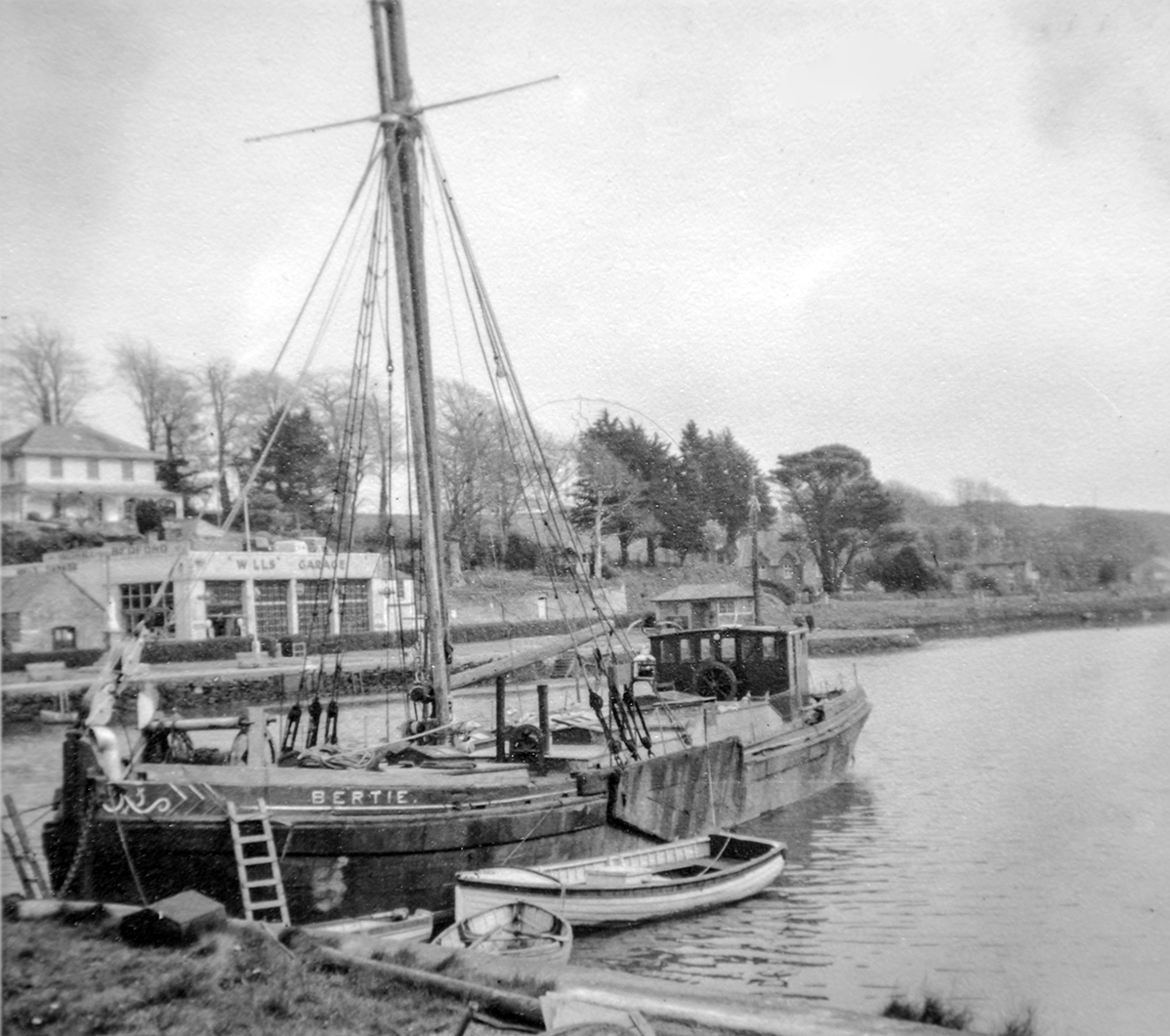 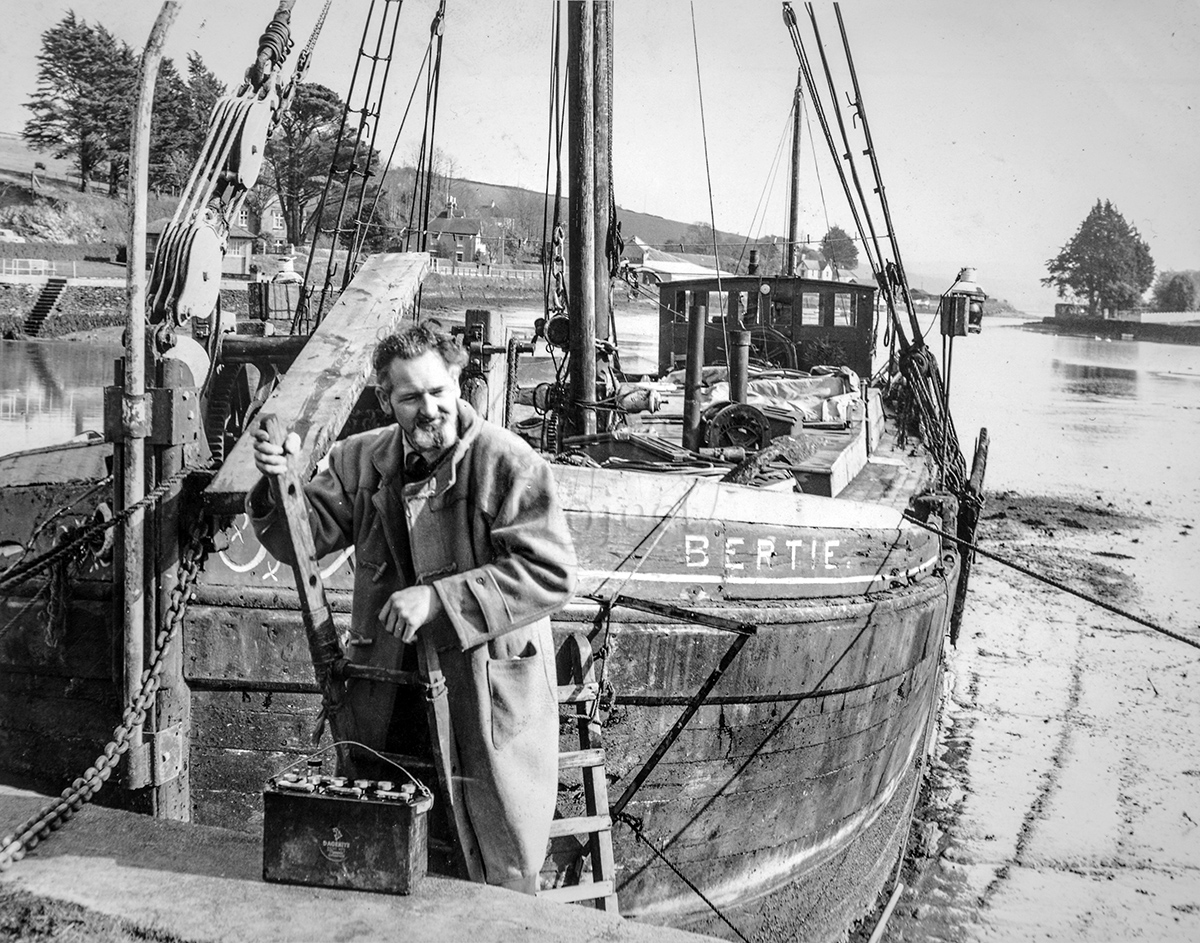 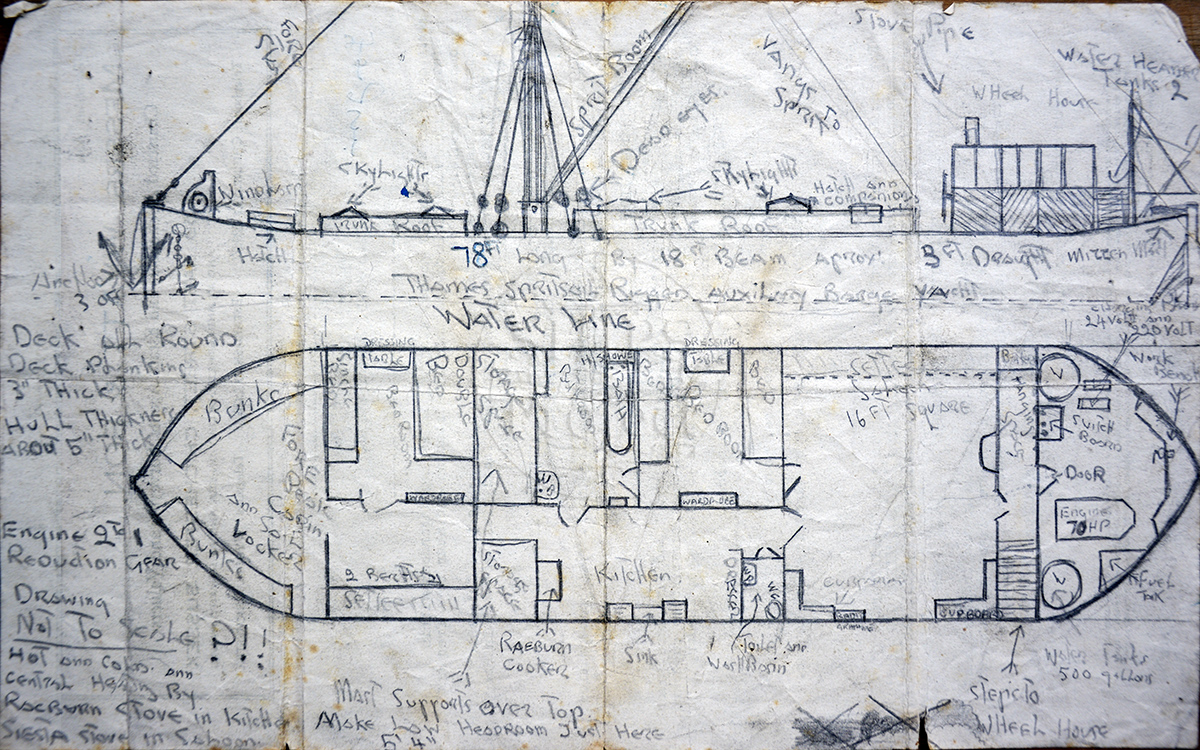 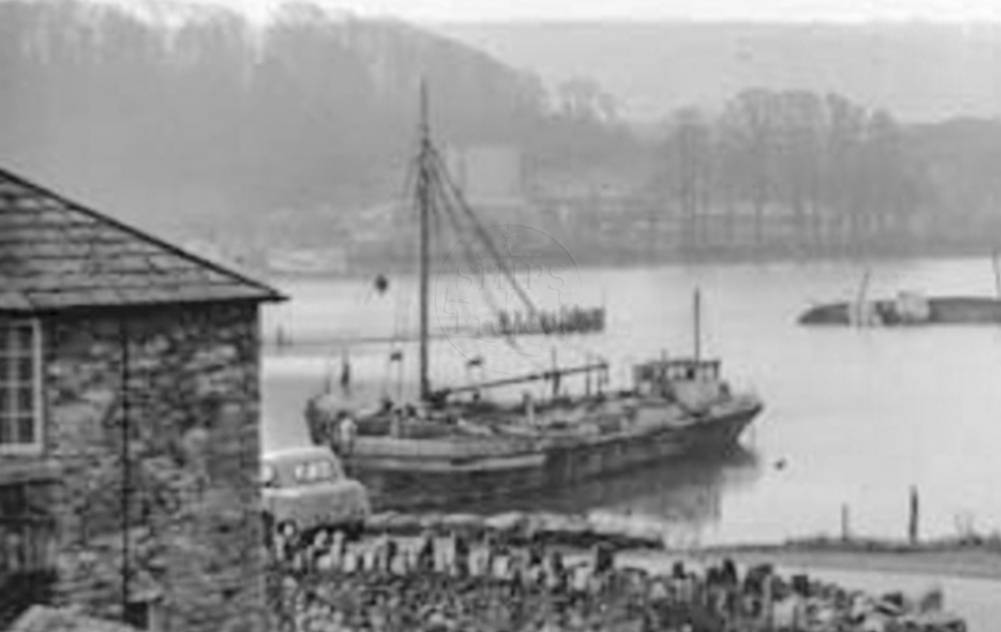 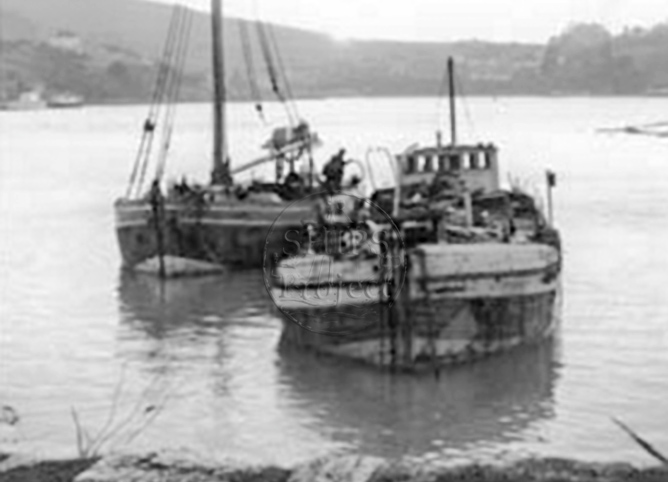 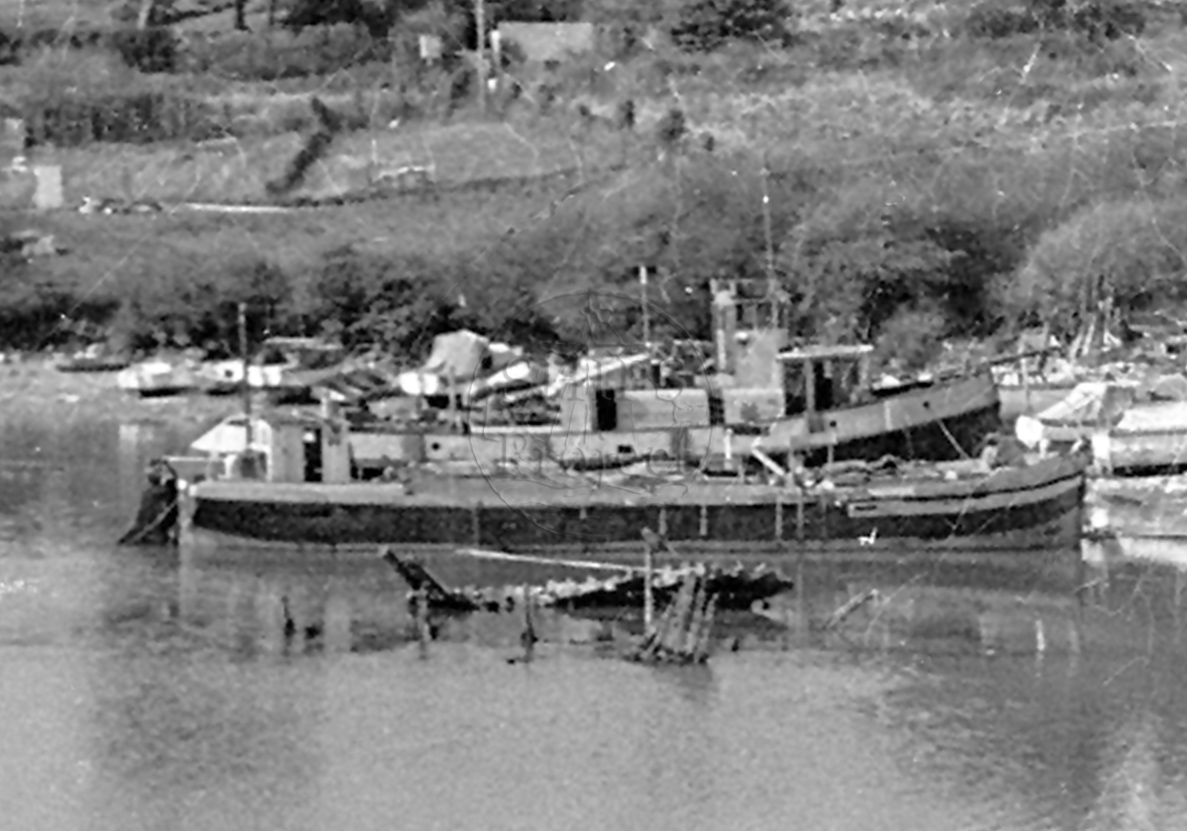 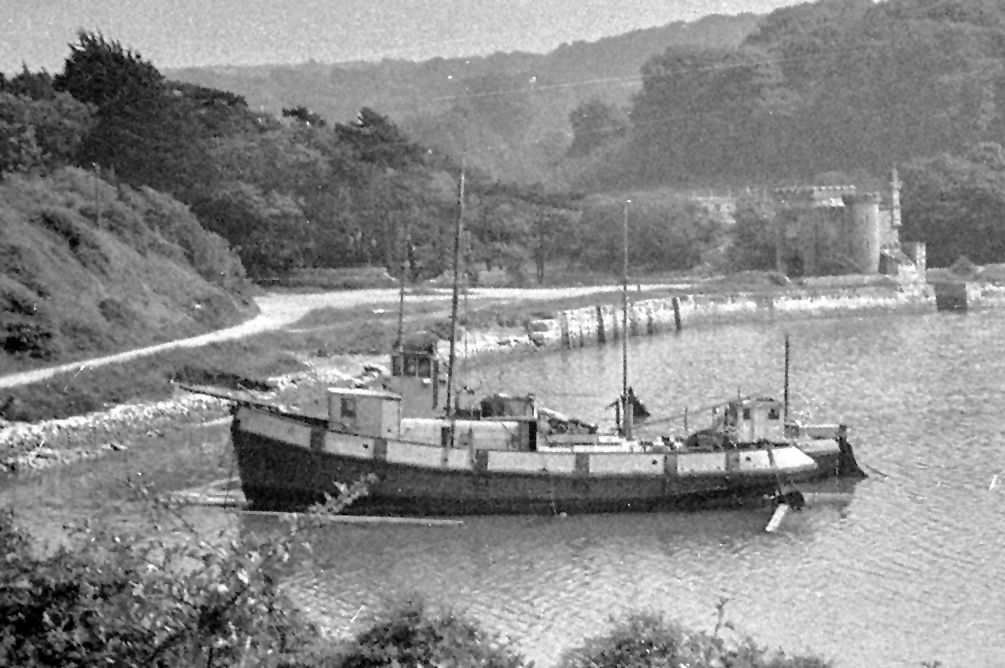 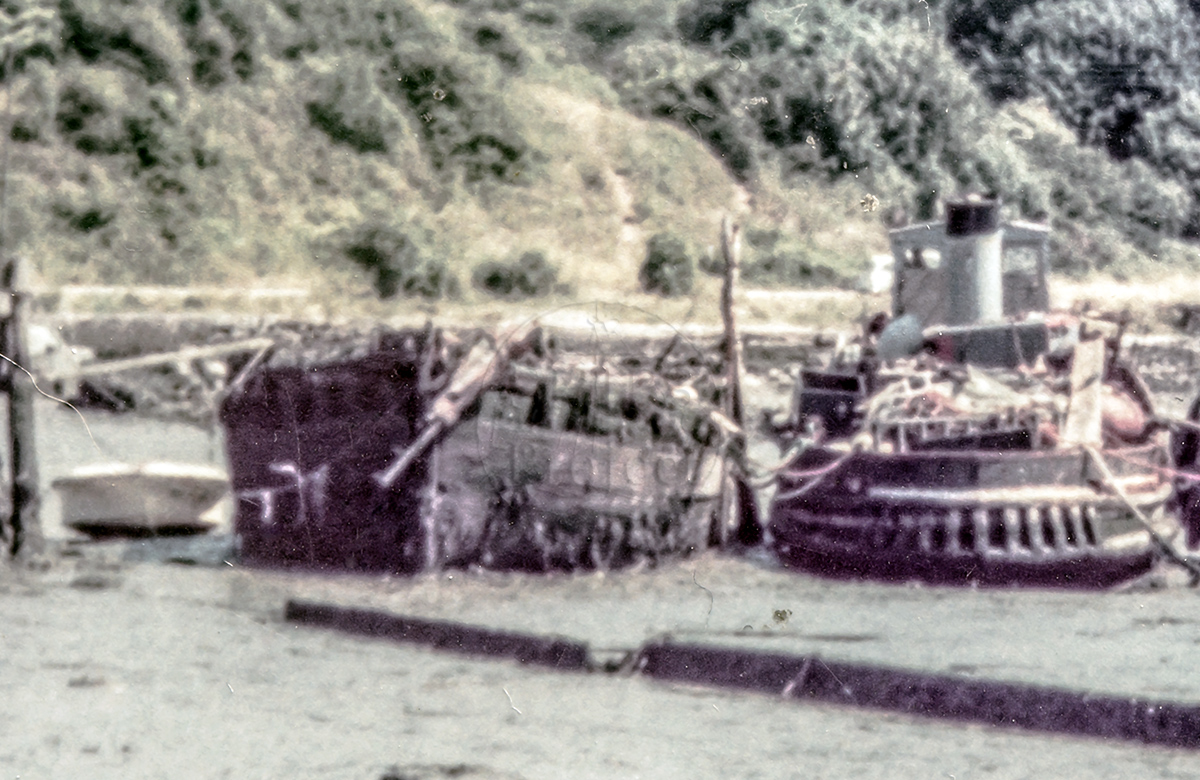