A large unknown sailing vessel abandoned at the far eastern end of Hooe Lake. This is one of the most interesting hulks on the Tamar waterways because its unique, very large and we know nothing about it.

Thought to be the Tamar barge Pearl, but at 31m / 101ft long this vessel is far too large and has the wrong type of hull.

This vessel was mentioned in the book Lost Ships of the West Country by Langley & Small as one of three vessels side by side at the east end of the lake. Their map of Hooe Lake describes this as the Tamar barge Pearl, 'one of three vessels moored alongside each other and floating every high tide, they gradually fell into this decay'. The Tamar sailing barge Pearl (ONO 132759) was built in 1840 and was used in the stone trade, described by Merry as a sloop with one mast and a running bowsprit, 24.29 GRT and 50 tons burthen, fitted with an engine in 1942. The Appropriation books record this vessel as having been re-registered in Plymouth on 6th October 1914. Mercantile Navy List 1915 says she was built in Stonehouse in 1896, 24 registered tons, owned by Robert Jefford of Saltash. Pearl was still on the Mercantile Navy LIst in 1940.

The lower part of the vessel is all that remains, but what still exists shows that this was a very heavily built vessel. The remains are 31m / 101ft long with a beam of 7.2m, although the original ship would probably be 33m long and have a beam of 8.5m. The floor timbers are quite flat and the ship came to rest on her port side with a list to port of just 7 degrees.

The frames are closely-spaced and are clamped between a massive keel 305mm / 12 in wide x 458mm / 18in and two 305mm / 12in keelson timbers bolted one above the other, the remains of which can still be seen together in the middle of the hull.

A single mast step can be seen 18m aft of the bow but no others remain because they would originally have been cut into the upper keelson and this is missing at each end of the hull. The vessel is at least 31m long which suggests that it should have two or three masts, and as one mast was fitted two-thirds of the way down the keel from the bow it is likely that this vessel originally had two masts. Probably too large for a local trading ketch and the surviving mast step is well forward, this vessel is likely to have originally been a two-masted schooner. The most popular rig for south west vessels of this size was the topsail schooner, with square topsails on the foremast.

The hull is fastened with a mix of methods including wooden trenails, 2.54mm / 1in diameter iron bolts and Muntz metal bolts. The outer planking is 65mm / 2.5in thick and at least some of it was attached by Muntz metal ragbolts as some have been found on the site. Cobble stone ballast can still be seen in-situ on the starboard side aft and the remains of the rudder and one pintle and gudgeon are still in place.

Three trial trenches have been dug across the wreck so that more of the ship can be recorded. Trench 1 is towards the aft on the port side, Trench 2 was on the port side in the centre of the vessel and Trench 3 was dug alongside the bow outside the ship so the depth of keel could be measured.

Remains of coal dust and a few small lumps of coal were found in trench 2 on top of the stringers and in the bottom of the ship, so this vessel may have been associated with the coal trade. Large amounts of coal were required by the mines around Plymouth, for domestic use and in the Dockyard and before the coming of the railways it was all brought in by ship. Alternatively, large vessels of this type sometimes ended their days as a coal hulk, particularly if the ship's bottom was strong as it would be able to support the great weight of coal filling her hold. Alternatively, the area of the hulk that we excavated could have been a coal store if this vessel were used as a houseboat, so further investigation is requried.

From Oreston, take the Lower Saltram road off Plymstock Road then turn right into Kingfisher Way. Follow the road down to the lake and there is a car park at the end. The wreck partially covers at high tide springs so plan a visit to coincide with low water, the foreshore is accessible when the tide height is less than 2.5m above chart datum. The foreshore round the wreck is soft mud so appropriate footwear is needed.

and the Millbrook steam ferry Cornubia

Abandoned before 1980, partly broken up

My grandfather used to go out at low tide in the 50’s and get wood for his fire, it burnt with a lovely blue flame. Our family home overlooked the lake.

The vessel may have been reinforced to carry heavy stone cargoes:

They were bad cargoes in rough weather and we rarely carried more than 100 tons (in Via, built by Uphams in Brixham, ed.), for a schooner with a kerb cargo sailed as if in a straight-jacket and, in a seaway, she had a most uncomfortable roll, the deadweight at the bottom of her half-filled hold acting like a pendulum.  I was always glad when a ‘stone’ cargo had been landed.
Schoonerman, Richard England, p53 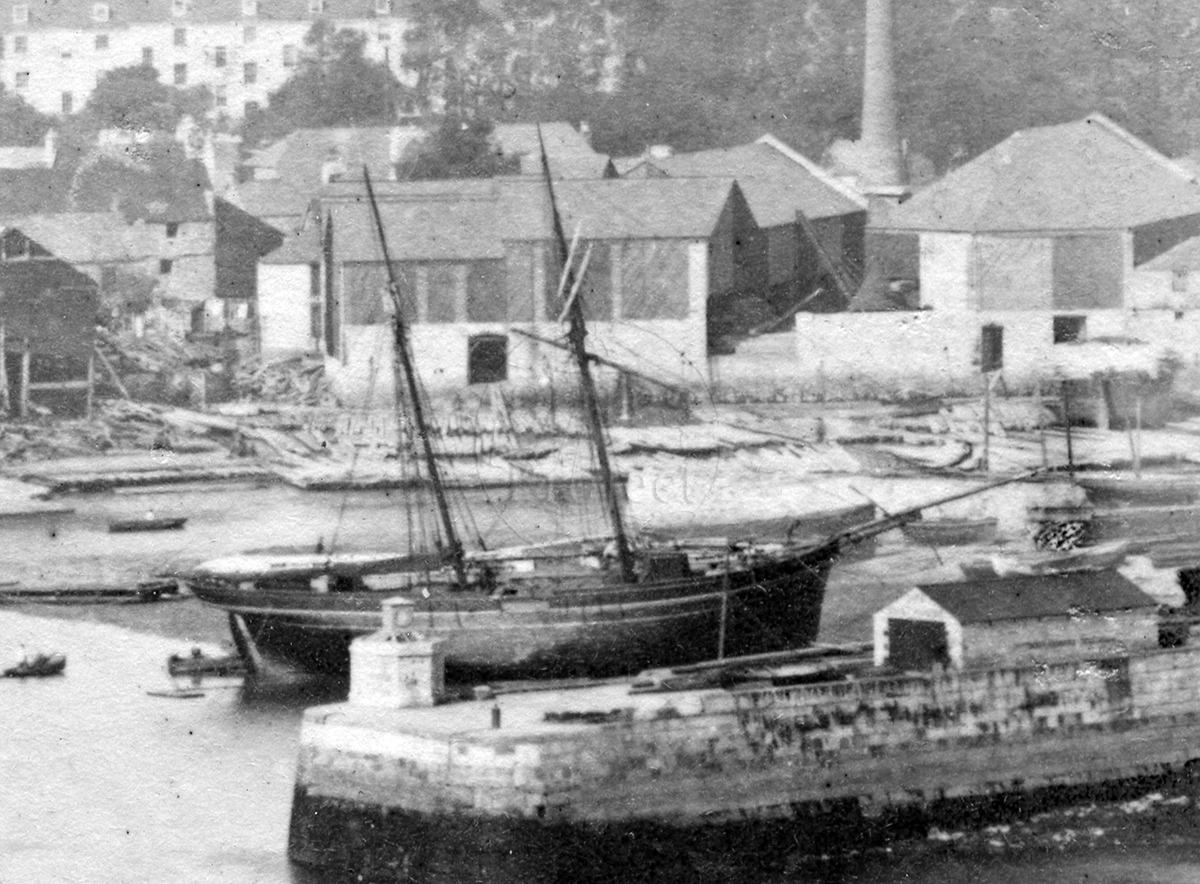 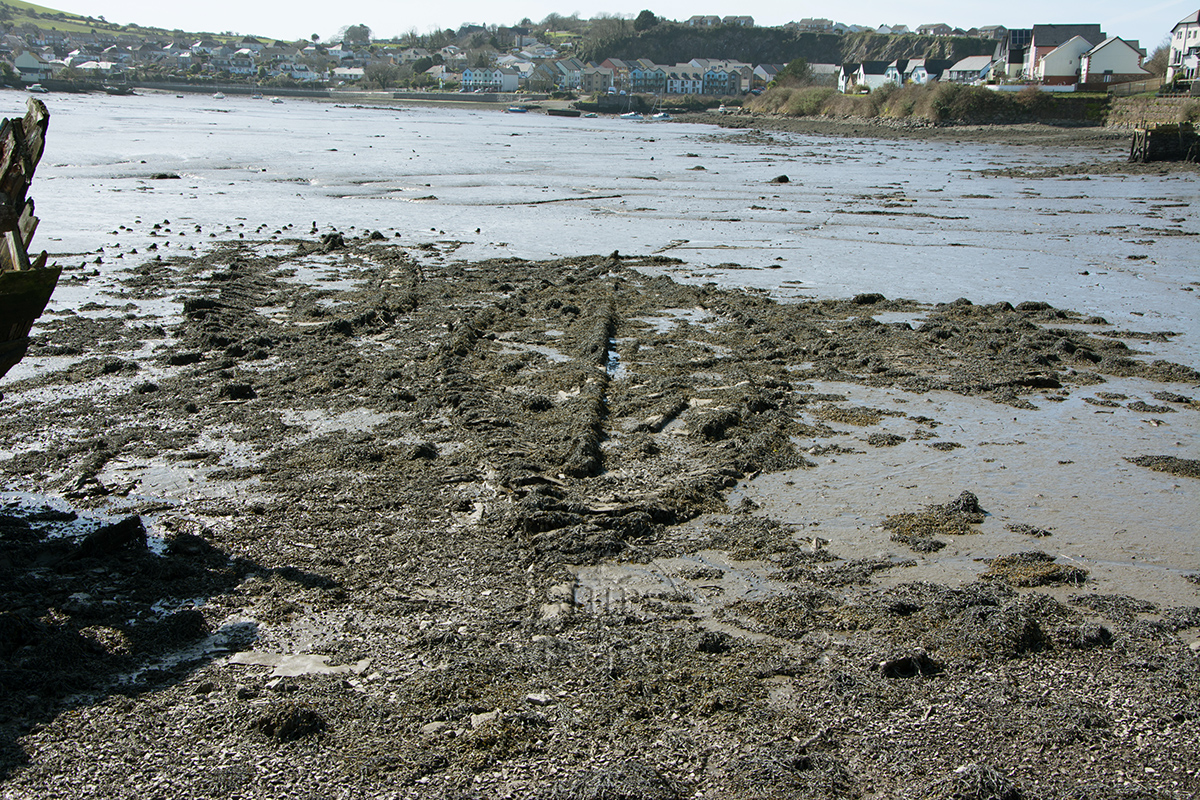 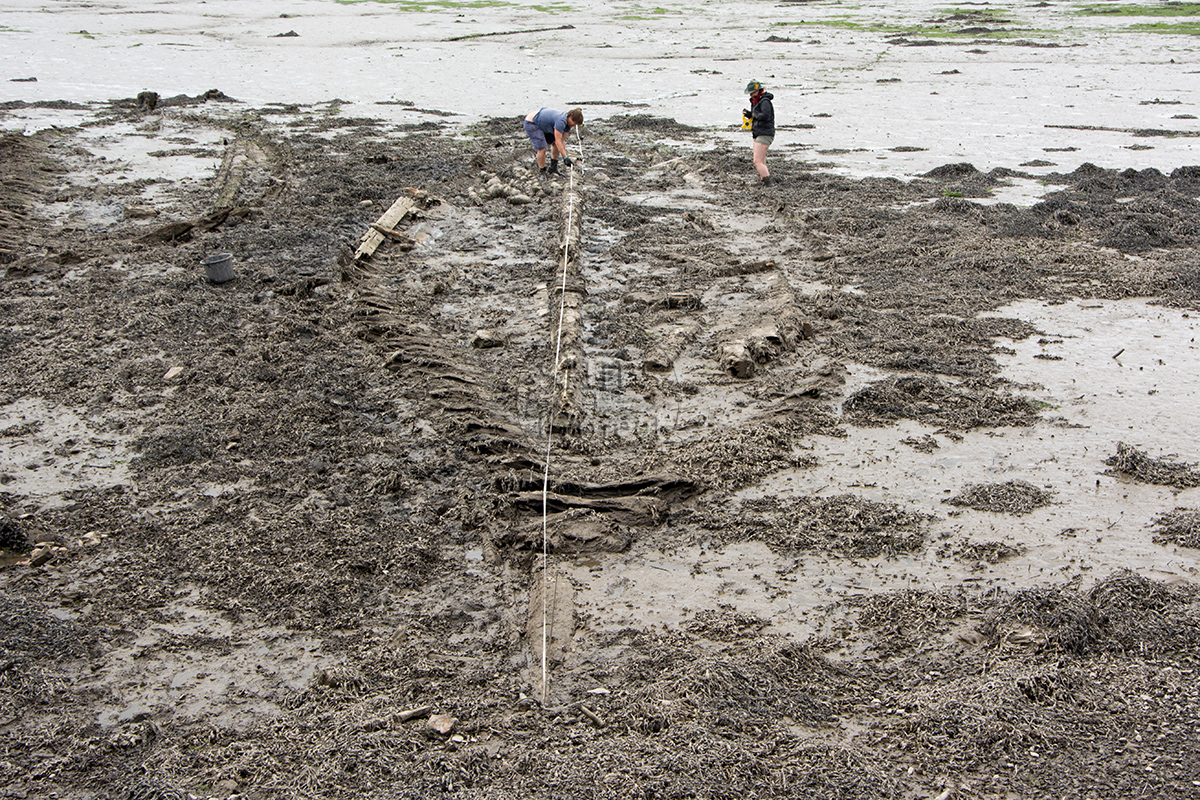 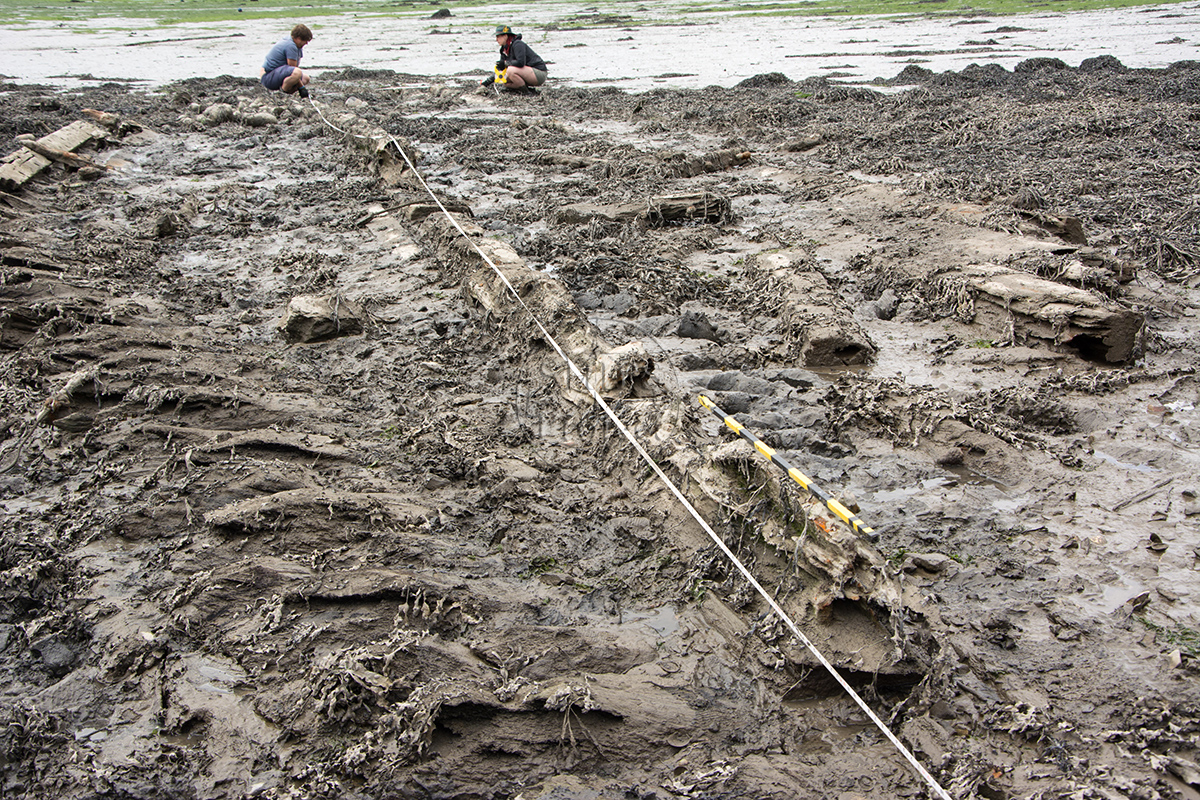 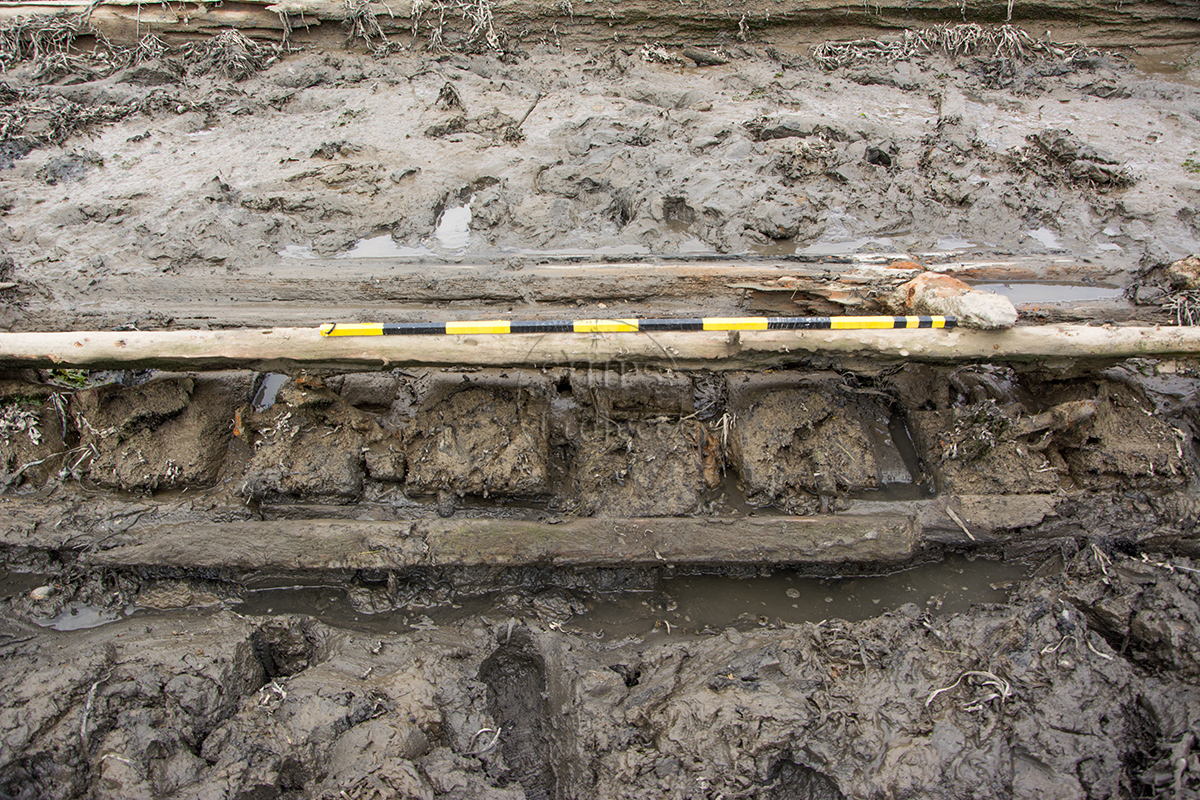