Many vessels have been abandoned or broken up in Sutton Harbour. The shipbreakers Demellweek & Redding took over the shipyard at Marrowbone Slip and broke up a number of vessels including NS660 below and the famous Black Swan class sloop HMS Amethyst. The paddle steamer Totnes Castle

was on her way to be broken up at Marrowbone Slip when she foundered under tow. 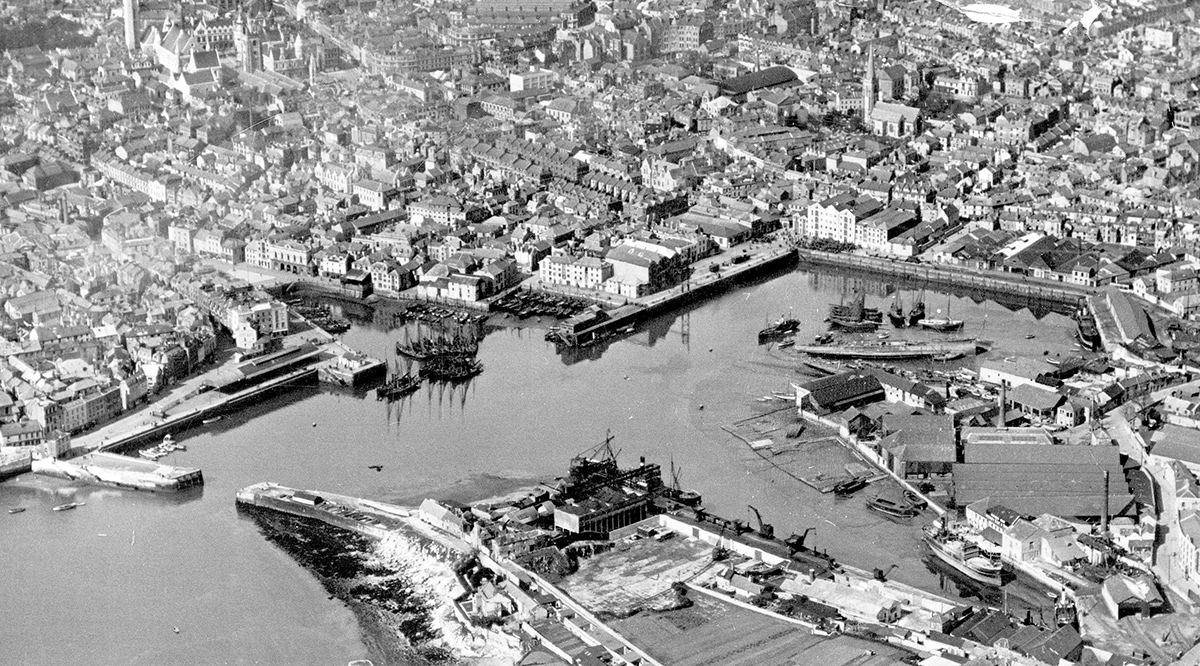 Sutton Harbour with ships being broken up at Marrowbone Slip

No remains of any vessels can now be seen in Sutton Harbour. The installation of lock gates to Sutton Harbour in 1994 has maintained a minimum level of water inside the harbour that before would dry out in the shallows at low tide.

The motor fishing vessel La Petite Stephanie was built at St. Peter Port, Guernsey in 1956 for trawling and dredging lines, registered as GU 5042. The diesel-powered trawler was 73ft long, breadth 21ft depth 9ft and 69.47 GRT with a crew of 6. In December 1975 she was owned by Channel Islander Anthony Leonard Ozard who lived in Plymouth (Figs. 1,2). It is likely that this vessel was buried at Carbeile Wharf along with the yacht Roy Fra Masnedo

and the barge Fowey No. 2

I found her in Sutton Harbour, Johnson’s Quay, in 1982, where the first photos were taken. She had tied up along the quay at high tide, when the tide went out the ropes weren’t let out and when the tide came back in it went over the gunwales. The photo below is of her in ‘Millbay Docks’ taken a few mouths later with all her superstructure gone. [John Cotton]

Two barges were scrapped at Marrowbone Slip in Sutton harbour, one called NS660 and the other unnamed. [John Cotton]

The Tavy was built in 1889 by F. Hawke Brothers in Stonehouse, a smack rigged vessel of 25 tons, 52ft long with a 15ft beam and a depth of 5.6ft. In 1948 she was reported derelict and incapable of navigation; her hulk lay for many years on the mud in the coal harbour across Sutton Pool, but by the 1980's she had disappeared. [John Cotton]

The Black Swan class sloop HMS Amethyst, famous because of the 'Yangtze Incident', was scrapped at Marrowbone Slip. Read the story here on the late Peter Mitchell's Submerged website 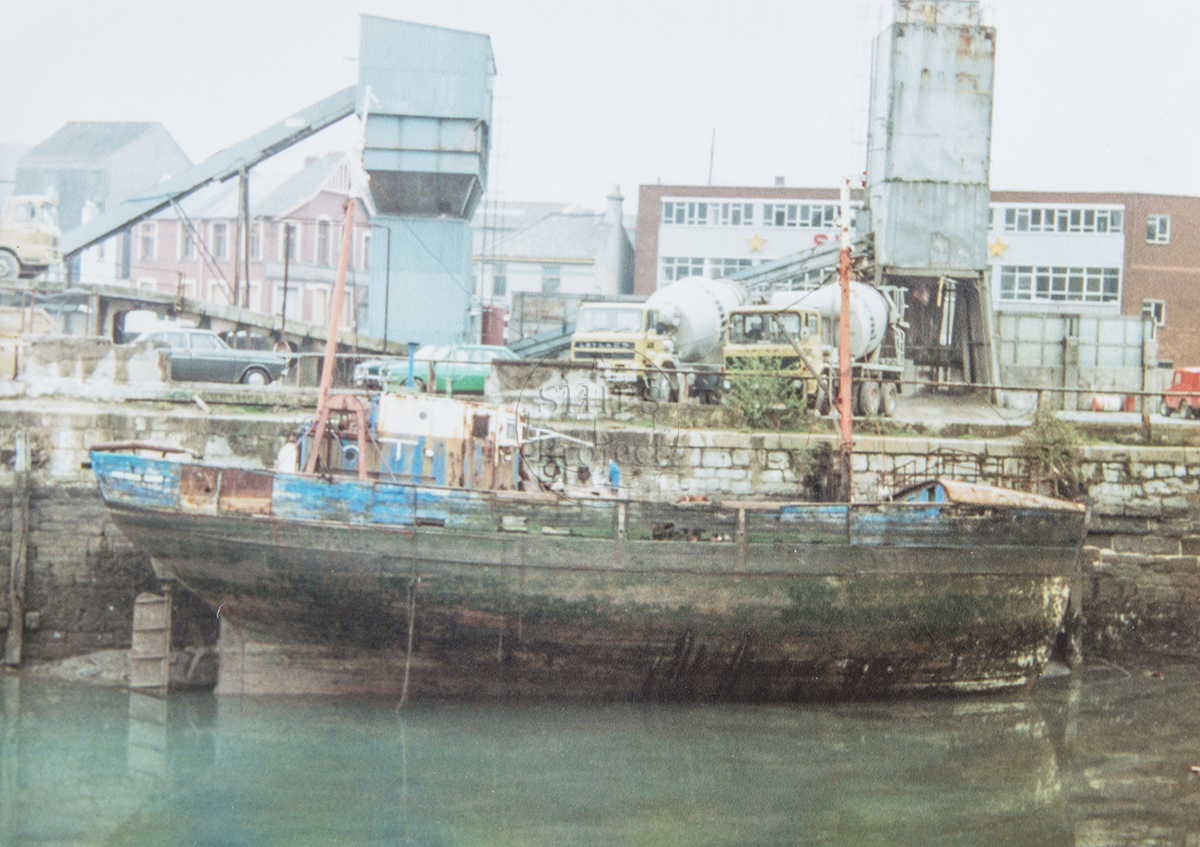 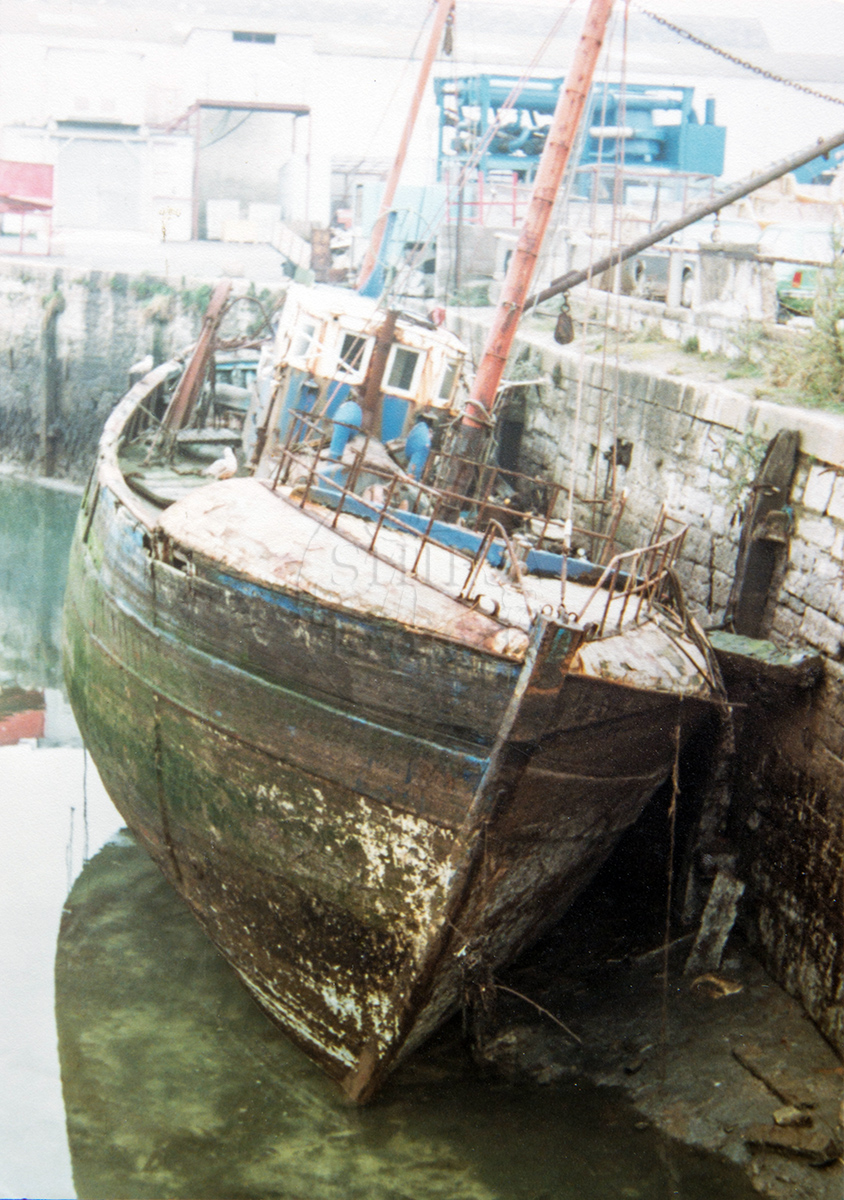 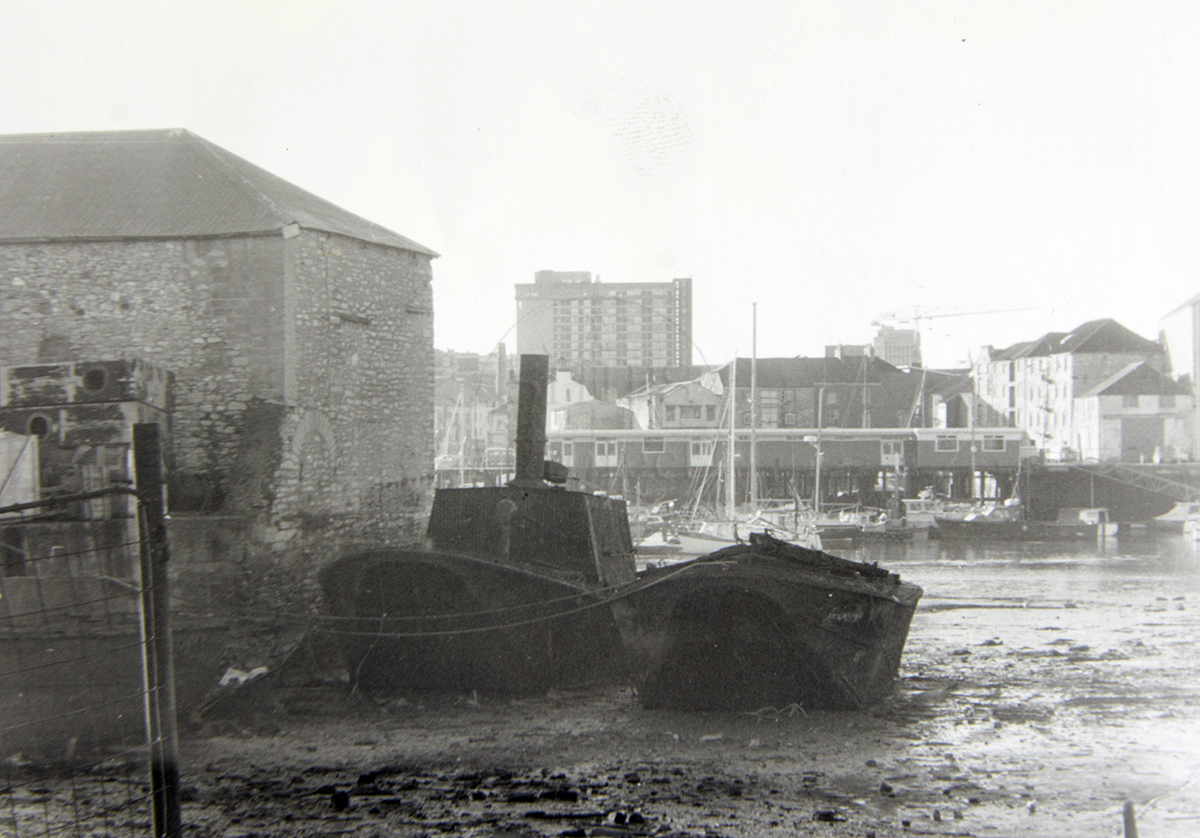 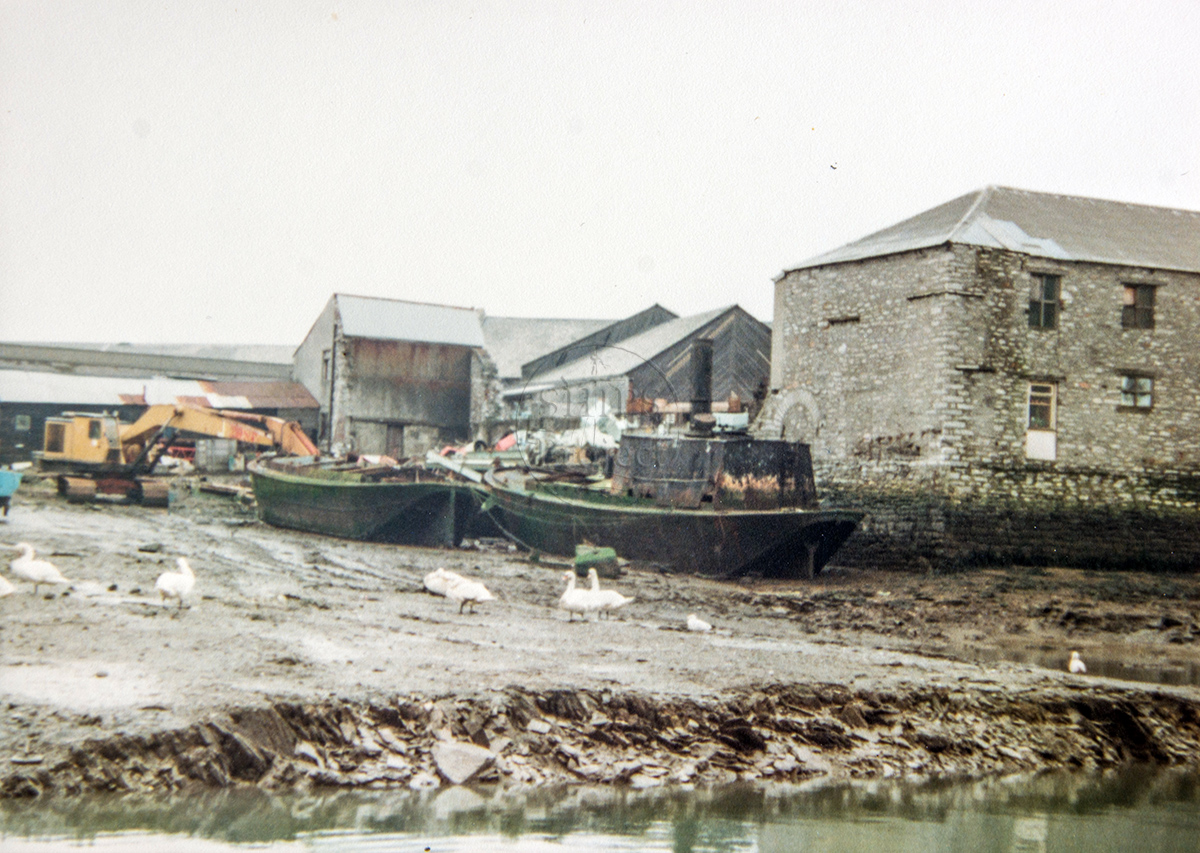 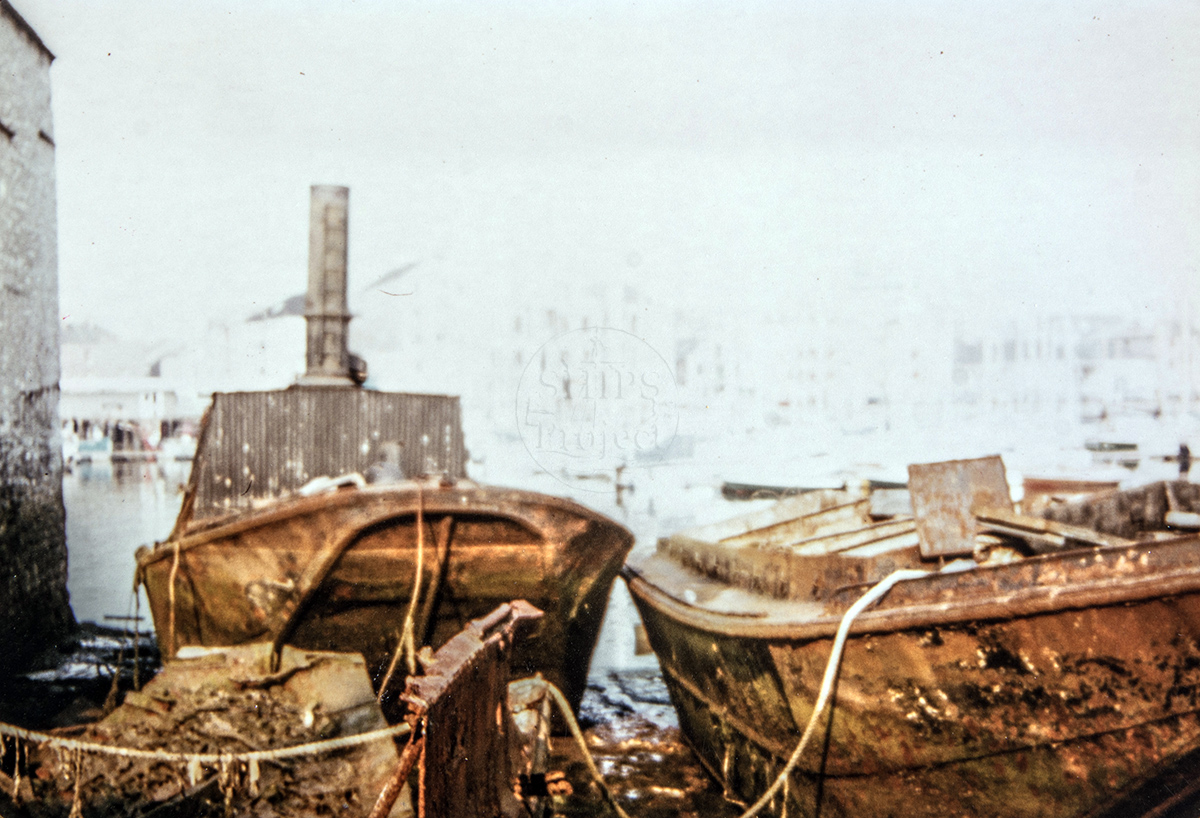