Royal Navy WW1 Torpedo Boat Destroyer sunk off Plymouth under tow to Devonport after hitting a mine off the Eddystone.

In 1900, at the turn of the century, the Royal Navy had not been a major sea battle in nearly 100 years.  Many of the old skills had been lost and the battlefield had changed dramatically with the development of steam power, big naval guns, armour and torpedoes.  The development of what was then called the 'locomotive' torpedo changed the Navy’s development strategy to include vessels that could fire torpedoes at the enemy, but it soon became apparent that they also needed defence against hostile torpedo-carrying boats - the Torpedo Boat Destroyer.

The first Torpedo Boat Destroyers (TBDs) were built for speed and could achieve speeds of between 26 and 30 knots, but for this the strength, seaworthiness and armament of the vessels was sacrificed (Fig. 1).  In practice these early designs could not sustain high speeds for long periods, they could not operate in anything but calm seas and were too lightly built.  A new class of torpedo boat destroyer was designed which rectified these faults and ten were constructed in the first programme between 1901 and 1903 in four different shipyards, these were the River or E class which included HMS Foyle. 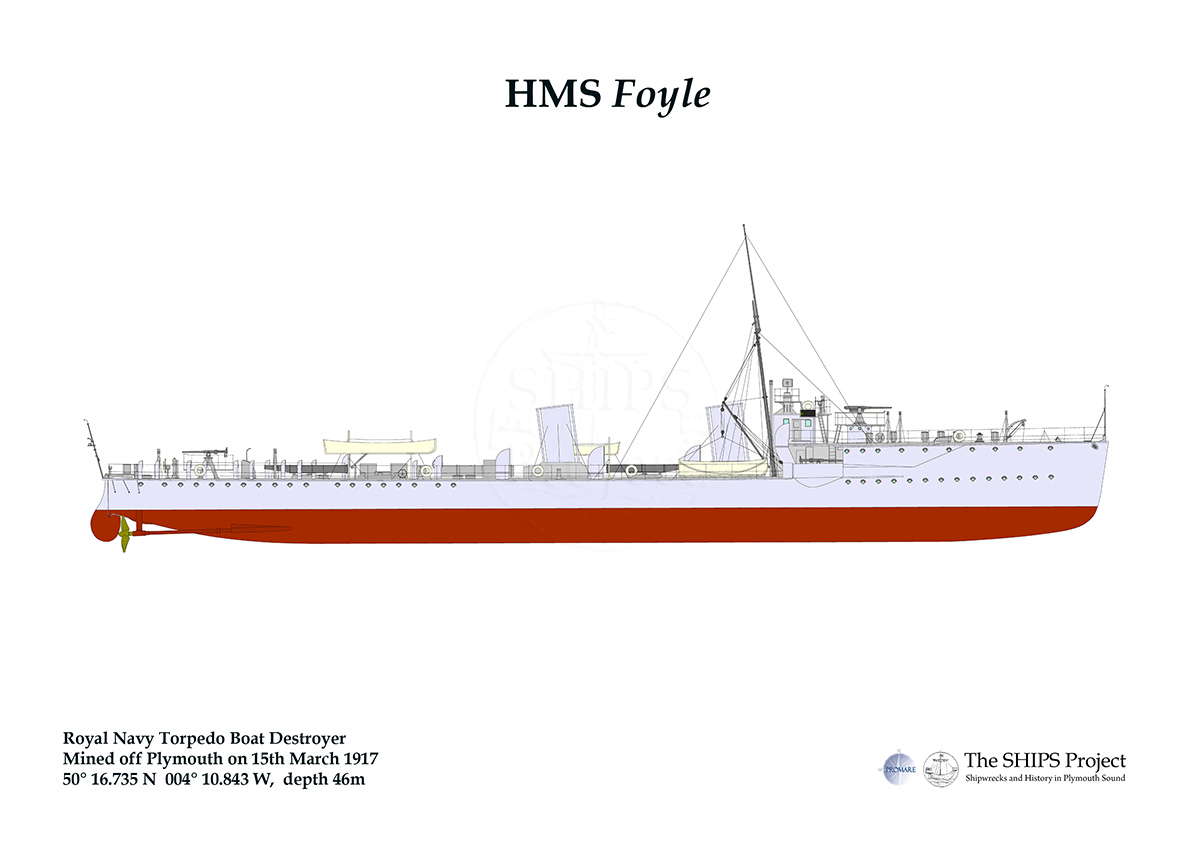 Drawing of HMS Foyle, click the image for a larger version

HMS Foyle was built in 1903 at the Cammell Laird shipyard in Birkenhead, one of the earlier developments of this class which differed slightly in design and machinery.  Foyle was launched on February 25th 1903 and commissioned on 1st March 1904 with pennant number N44 then became D20 from September 1915.  The ship had a long narrow hull 68.6m (225ft) long but only 10.2m (33.5ft) wide, her coal-fired triple expansion steam engines developed 7000hp using steam from four Yarrow type boilers and she could achieve a maximum speed of 25.5 knots (Fig. 2).  Foyle was armed with four 12 pdr guns, one on the bow, one on each side and one on the stern, and had two 18 inch torpedo tubes with one mounted between the funnels and one mounted aft.

This type was one of the first ocean-going fleet destroyers and as such the speed of this ‘River’ class vessels was sacrificed to achieve greater seaworthiness as there was no point in being able to go fast if you could not cope with bad weather.  No fewer than 34 of these destroyers were launched between 1903 and 1905, and two more by 1909. The rounded ‘turtle-back’ forward deck used in the previous destroyer designs was replaced by a normal forecastle, raised to improve sea-worthiness and allow the forward gun to be used in rough weather.  The River class marked the turning point in the transition of the destroyer, from an enlarged torpedo boat to a useful fleet escort vessel. Their speed of 25 knots was considered disappointing but it could be maintained in foul weather, whereas the earlier so-called ‘27 and 30 knotters’ never quite reached these speeds in smooth water, and fell far short of them in rough water.

At the outbreak of the war HMS Foyle was stationed at Dover and operated with the Dover Patrol, a collection of 7 Tribal class destroyers, 13 older destroyers, armed trawlers, armed drifters, yachts and auxiliary craft.  Operating in the southern North Sea and straits of Dover, the Dover Patrol was a key element in the defence of England’s shores and in maintaining the blockade of Germany. Foyle was assigned to the 1st Destroyer Flotilla in August 1915 and redeployed to Portsmouth in November 1916. The age-old but forgotten ship convoy system was re-introduced in 1917 in response to increasing German U-Boat attacks and the 1st Flotilla was employed as escorts for convoys up and down the English Channel for the remainder of the war.

The official account of Royal Navy vessels lost in WW1 states that on 15th March 1917 the bow section of the Foyle was blown off by a German mine in the Dover Straits, killing 27 of the 70 crew on board.  However, Admiralty telegrams sent at the time state that she struck a contact mine laid by the German submarine UC-68 12 miles SSE of the Plymouth Breakwater at position at position 50°11' N 03° 58'W (Fig. 4).

In the captain's report, Lt. A.H.D Young reported that Foyle hit a mine when just over 3 miles to the east of the Eddystone lighthouse early in the morning of 15th March. The huge explosion heavily damaged the ship on the port side bow and destroyed some of the mess decks forward killing 27 sleeping sailors. The ship started taking on water in two boiler rooms so damage control parties shored up bulkheads and shut watertight doors. Three men had been trapped in the wreckage, two of which were freed badly injured however one could not be reached. The steam collier SS John O'Scott came alongside to help after being signalled by the stricken ship. Most of the crew and all the injured were taken on board the collier then she took the Foyle in tow stern first to minimise strain on the damaged bow. Destroyers Boyne and Bittern came alongside and transferred men and equipment that were used to free the trapped crewman. The tug Illustrious arrived from Devonport to offer assistance, the tow line was transferred and they began the slow journey towards Devonport. However at 2:10pm the Foyle started to settle by the head and she sank to the bottom.

Those who lost their lives on HMS Foyle were:

Most of the River class destroyers were broken up after WW1.  Of the first 10 built, HMS Derwent struck a mine off Le Havre, the turbine-powered HMS Eden sank in a collision with SS France and lies on the seabed in 34m off Fecamp in France, while HMS Itchen was torpedoed by a U-Boat in the North Sea and lies in 97m depth. HMS Boyne was broken up after the war yet her bell was found by a Plymouth diver on the seabed off Rame Head in 1988 and it was put up for auction in 2012, it is thought the bell went overboard during a collision which is how it ended up on the seabed off Rame.

The location of the wreck was known to anglers in the 1960s and was known as the ‘Torpedo Boat’ to some and 'The Ledges' to others. It is not clear who first dived the wreck. One story says that boatman Richard Floyd took Plymouth diver John Kelly out to the Foyle, Kelly retrieved one of the tread plates cast with the name Foyle and the wreck was identified. Another local divers' story tells of Floyd and Kelly going out in a small boat to salvage brass from the wreck. Kelly would take three small diving cylinders with him; he would dive on the wreck for a short time collecting scrap, surface and stay on the boat for an hour, do the same with the second cylinder and wait an hour, then with the third cylinder he would load the scrap into a Post Office mail sack and send it to the surface under a lifting bag. Despite the repeat dives to 50m, the short dive durations and hour long surface intervals meant that Kelly would avoid decompression sickness in the days before dive computers.

The claim to have first dived the wreck is also made by members of Kingston BSAC who first dived it in August 1970 and identified the ship by the name stamped on her propellers along with a brass nameplate recovered in 1972. It is thought that one of their members, Mr Calkin, reported the wreck to the UK Hydrographic Office in that year.

In the 1980’s the conning tower (Fig. 8) was removed along with the forward 12 pdr gun (Fig. 6) and the emergency steering position (Fig. 9), however the bottom part of the conning tower along with the helm, telegraph and other fittings did not make it ashore and was lost somewhere between the wreck site and Penlee Point. The conning tower itself, the gun and the steering gear were taken to the Charlestown Shipwreck Museum and put on display. The starboard gun was also salvaged and the barrel was dumped on the seabed near Fort Bovisand, while one of her torpedo tubes complete with torpedo was recovered by a local salvor then scrapped. 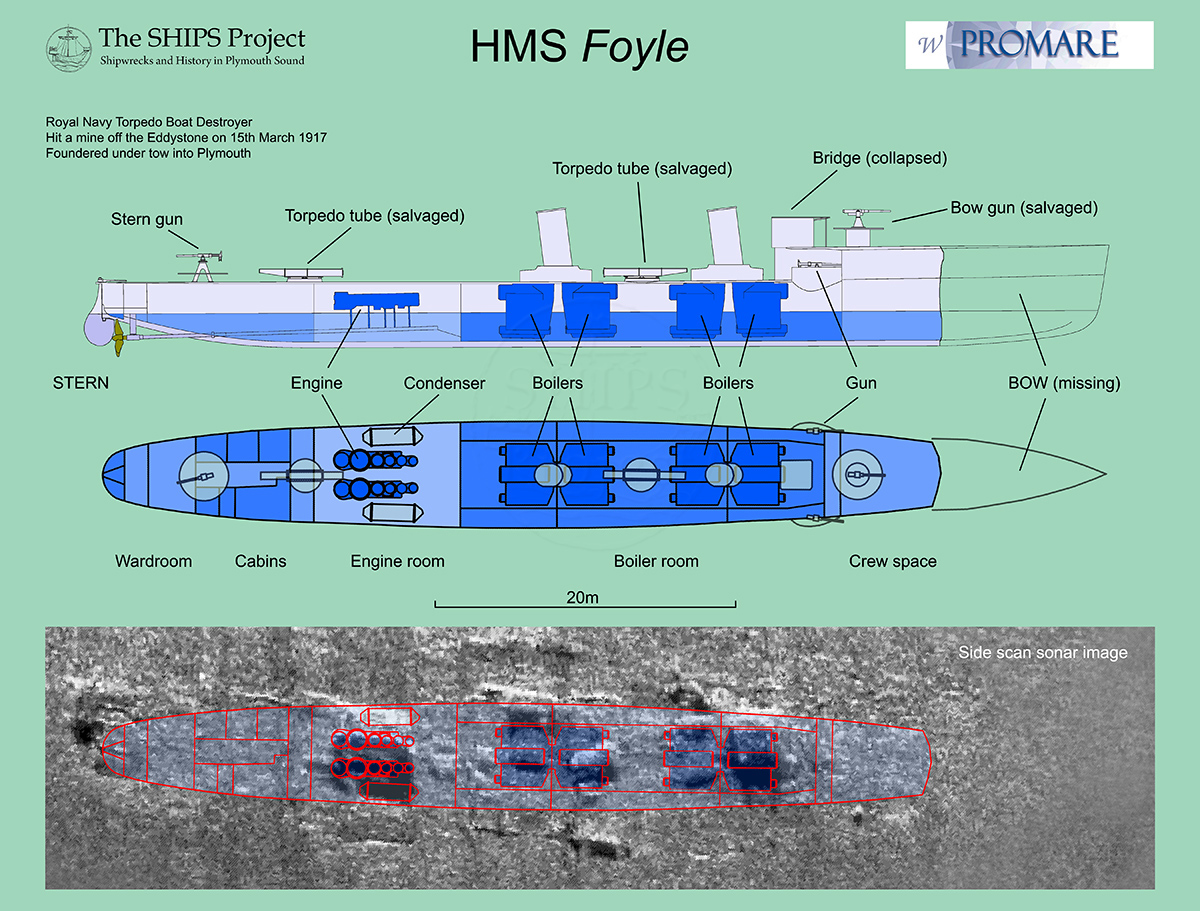 Site plan of HMS Foyle, click the image for a larger version

The Foyle lies heavily broken up on a seabed made of sand and small stones in 46m depth, with her stern to the north-west, upright but with a list of 30 degrees and the port side buried, see the site plan above.  The ship was lightly built and was subject to the attentions of many salvors so the hull has not survived above the level of the seabed.  The two engines and the remains of four strangely-shaped Yarrow boilers stand 2-3m proud of the bottom (Fig. 10) and a propeller shaft leads from one of the engines to the stern.  Little remains forward of the boilers as the bow section in front of the bridge is missing. The bow gun was recovered, the starboard gun should still be on the wreck and the 12pdr gun is visible on the stern.

The Foyle was well-known Plymouth sport diver Roger Dadds favourite wreck. Roger fished over a site called 'The Ledges' in 1963 not knowing it was the remains of HMS Foyle, Roger relocated the site and dived the wreck in 1985 and visited it again on more than 100 occasions (Fig. 10).

Nearby wrecks include Unicorn

Show the site on OpenSeaMap

The Way They Have in the Navy, 1899:
But the torpedo boats were in evil case.  I watched them through my glasses as they split the advancing seas, rushing clean through those masses of water amid a white cloud of foam that hid them from sight.  Knowing the conditions of life on board these tiny steel shells, even under the most favourable circumstances, I was filled with pity for their miseries.  Most of all for the ‘tiffys’ in charge of those vibrating, coffin-like boxes of tearing machinery within a few inches of which they must crouch amid a steady shower of oil, blinding sweat, and a temperature of about 150 deg.  Knowing too, that 1-16th of an inch of steel is all that divides them from the hungry waves without.


Video of HMS Foyle by Richard Knights in 2017 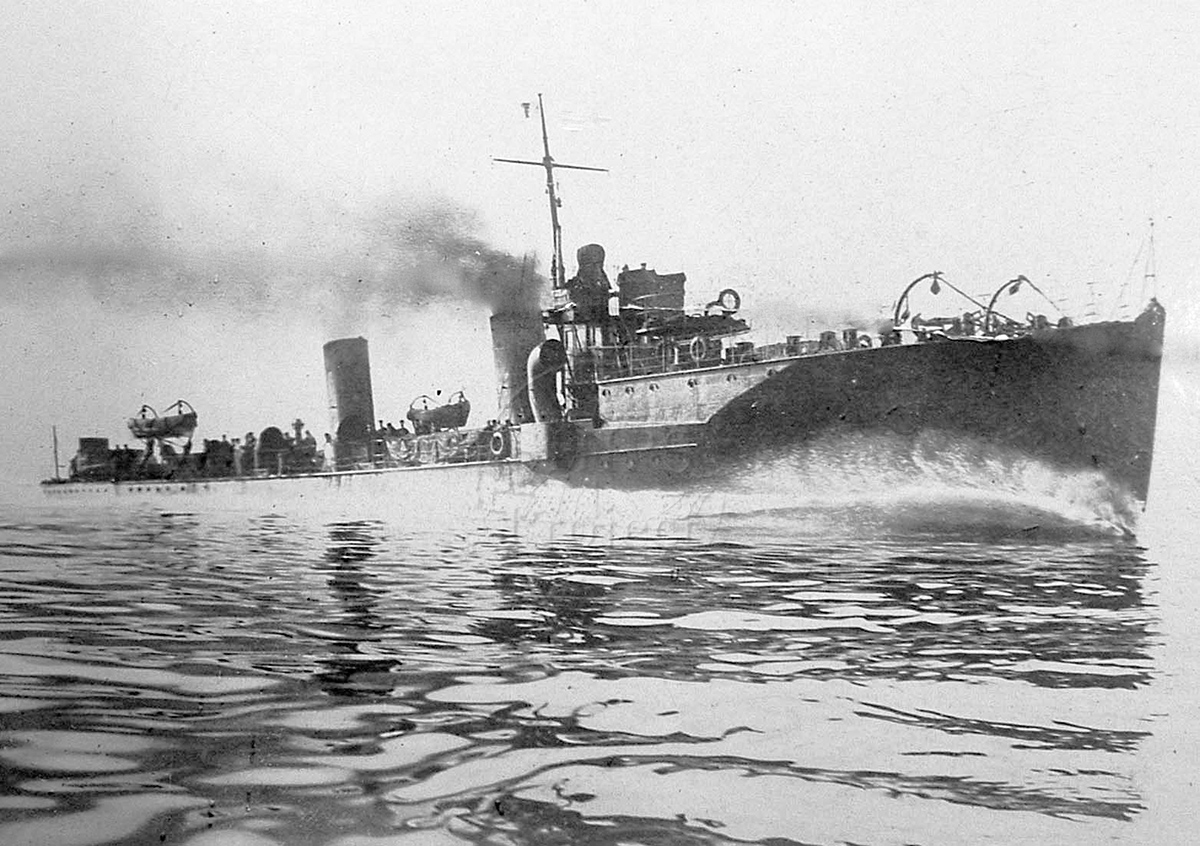 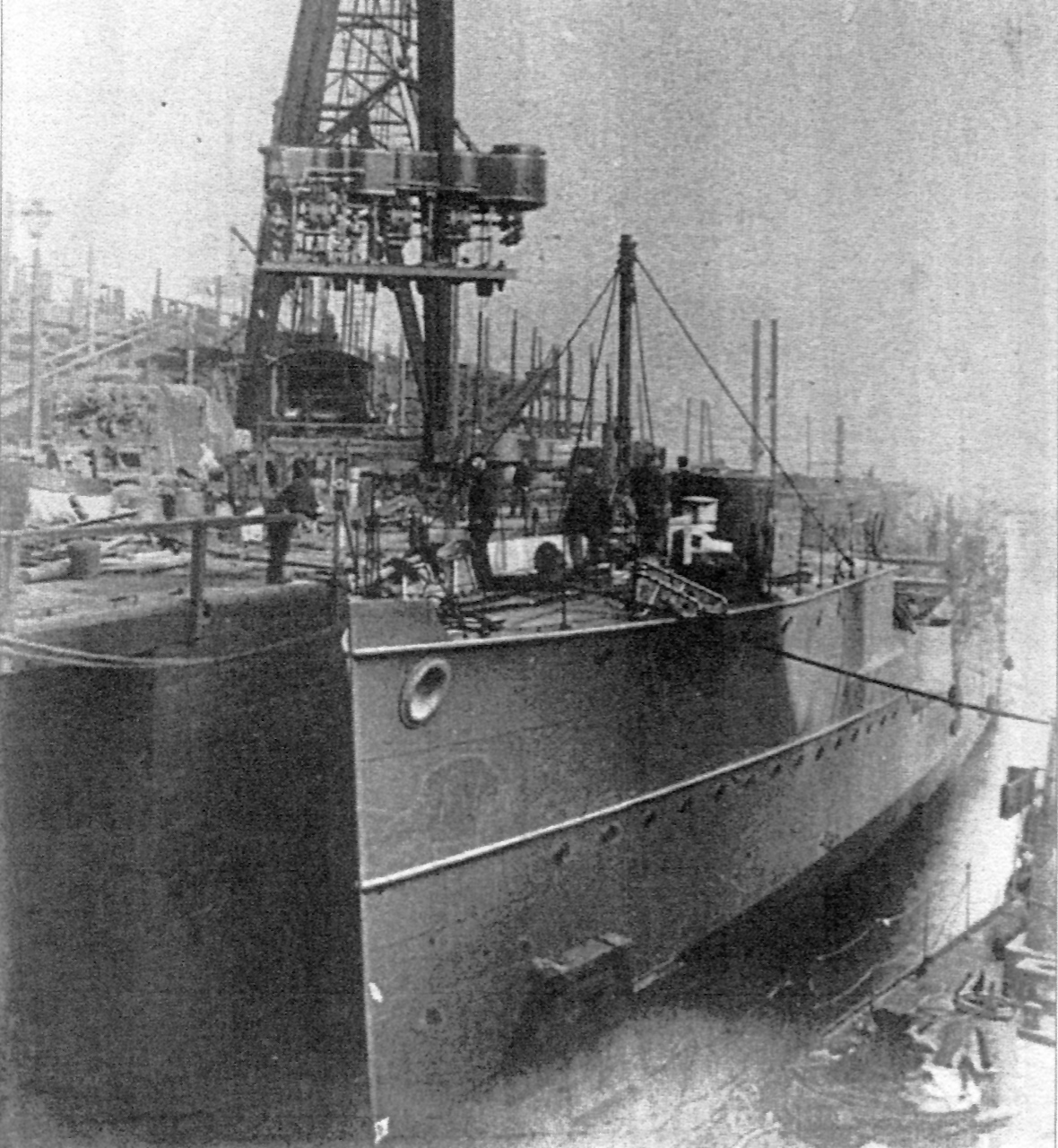 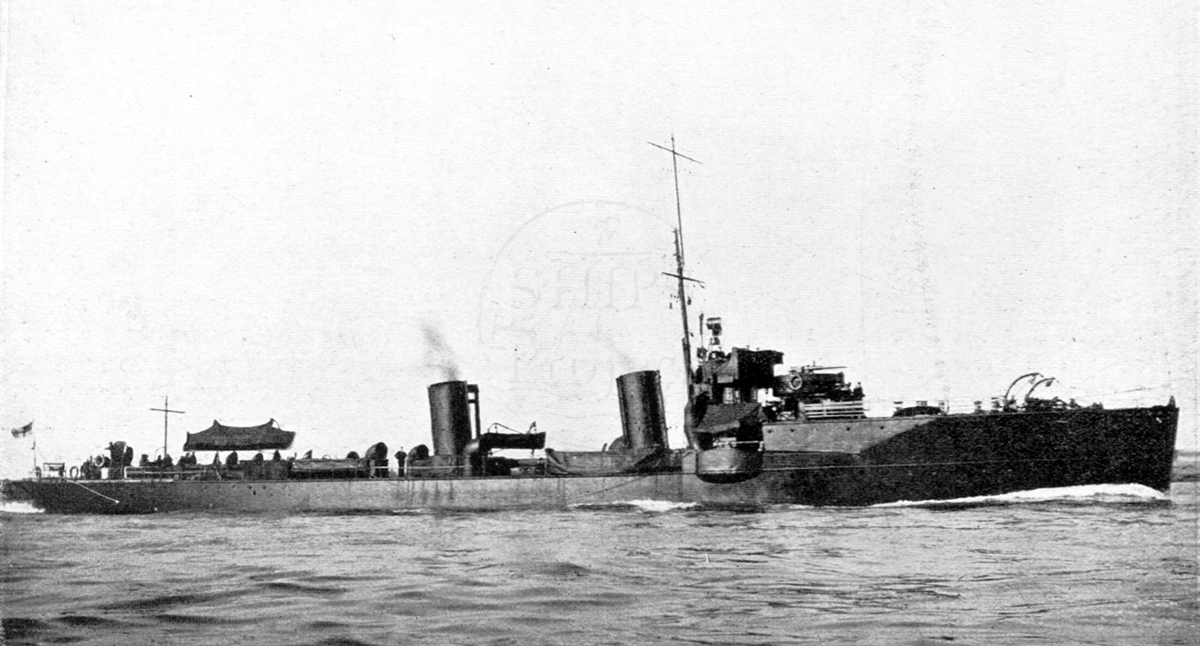 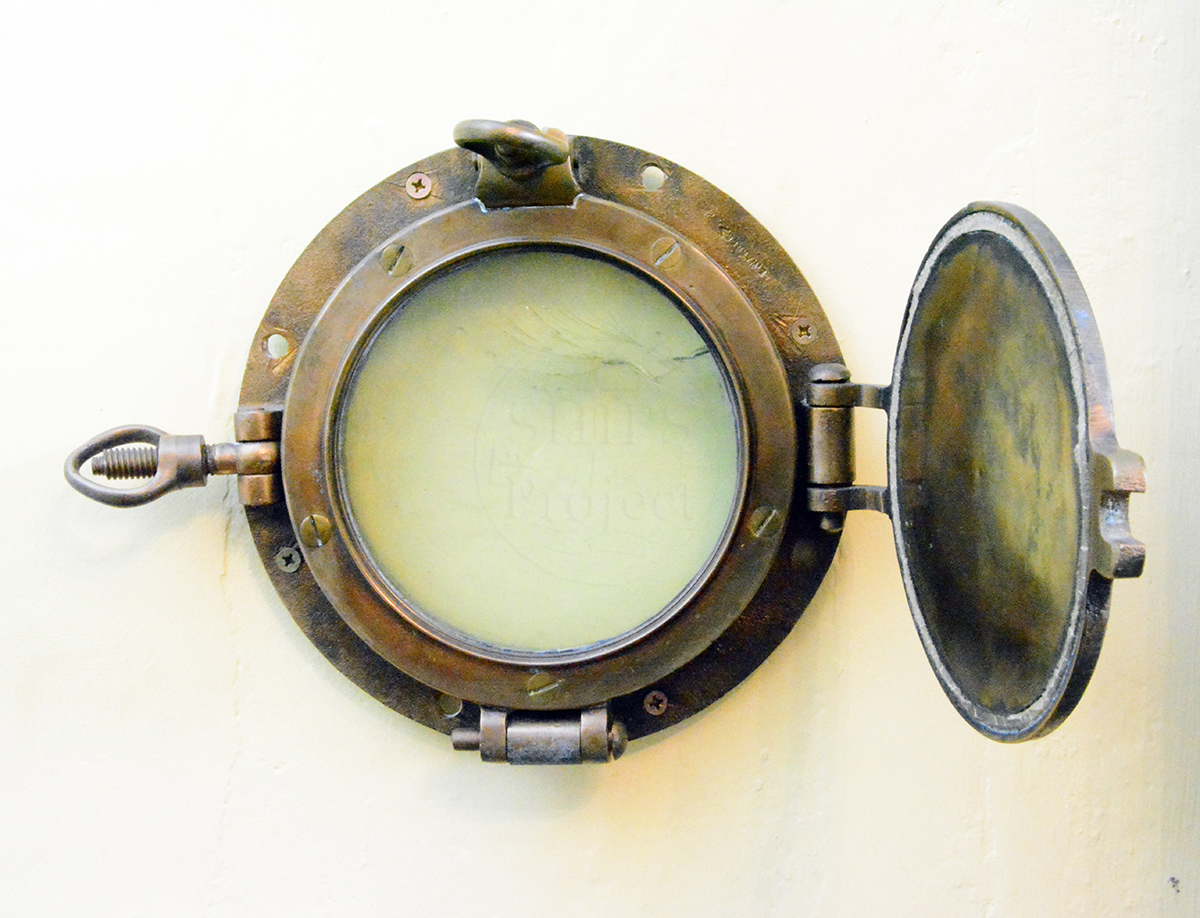 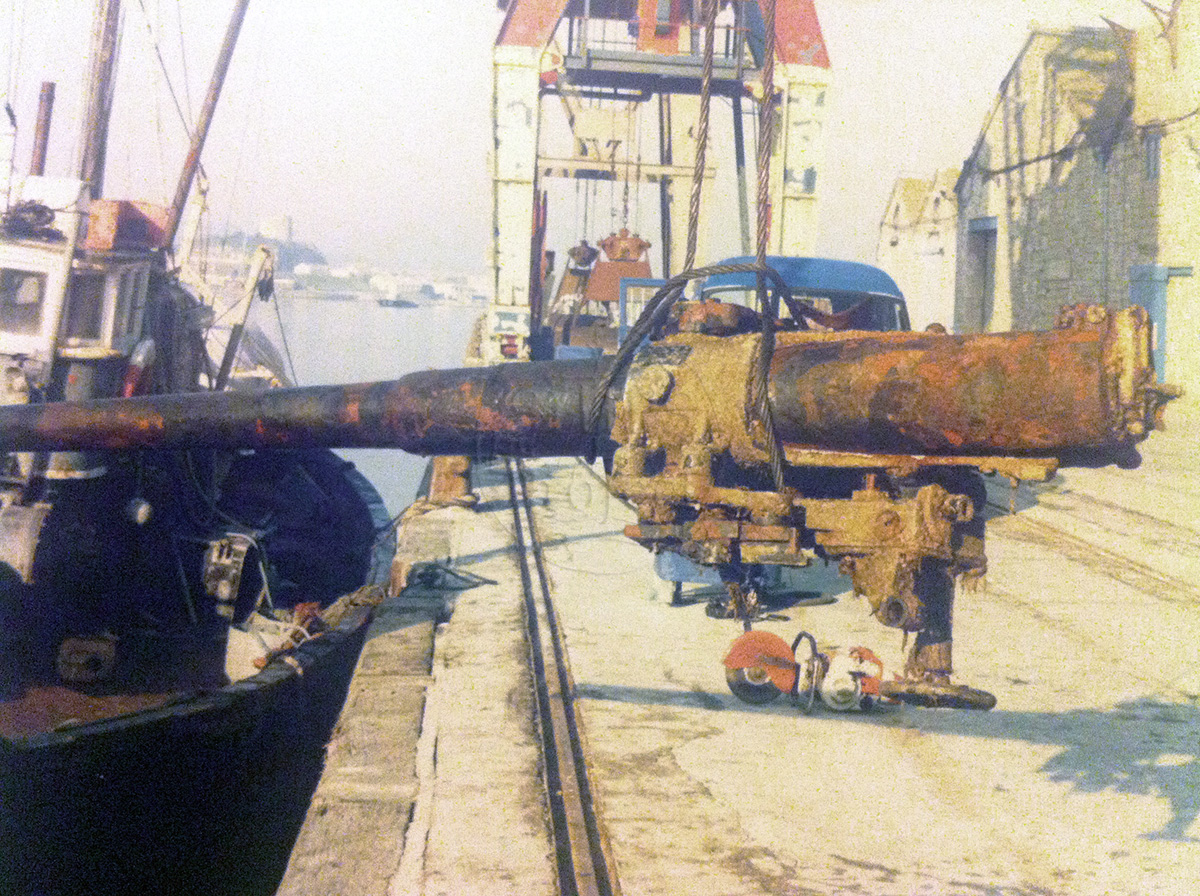 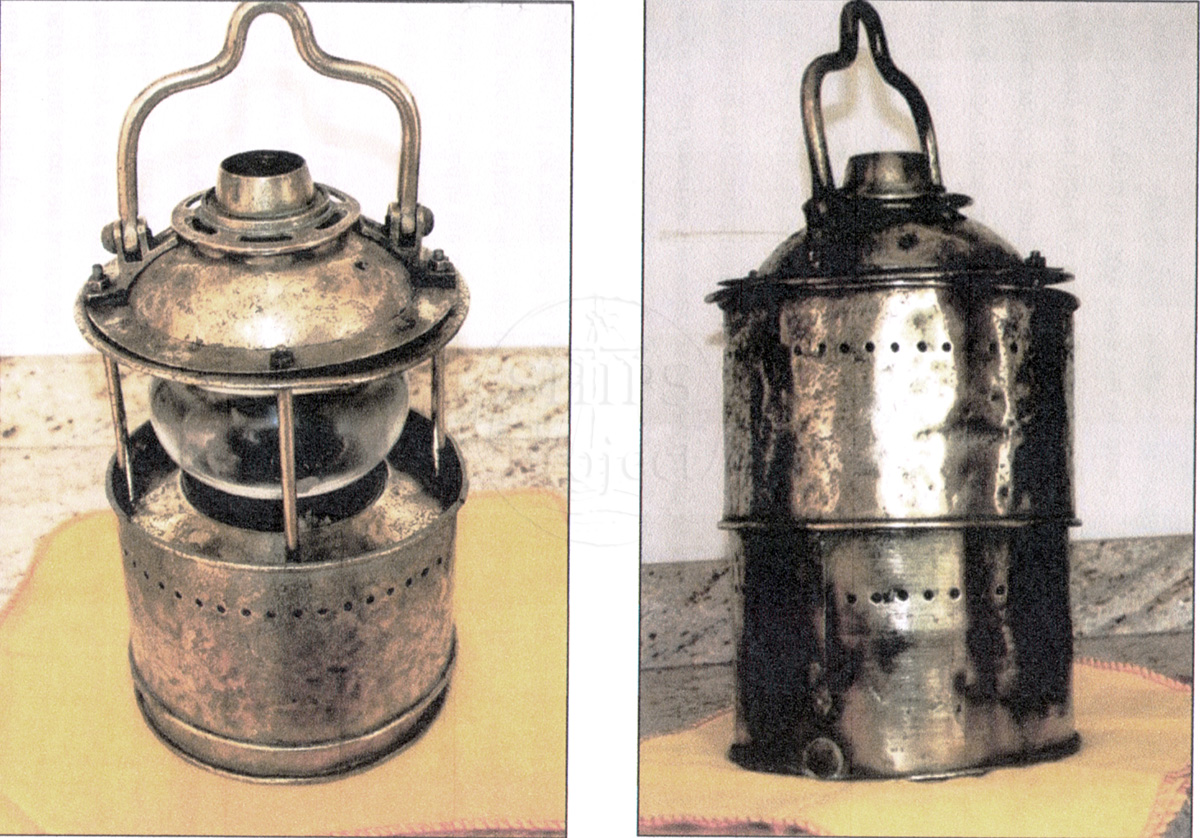 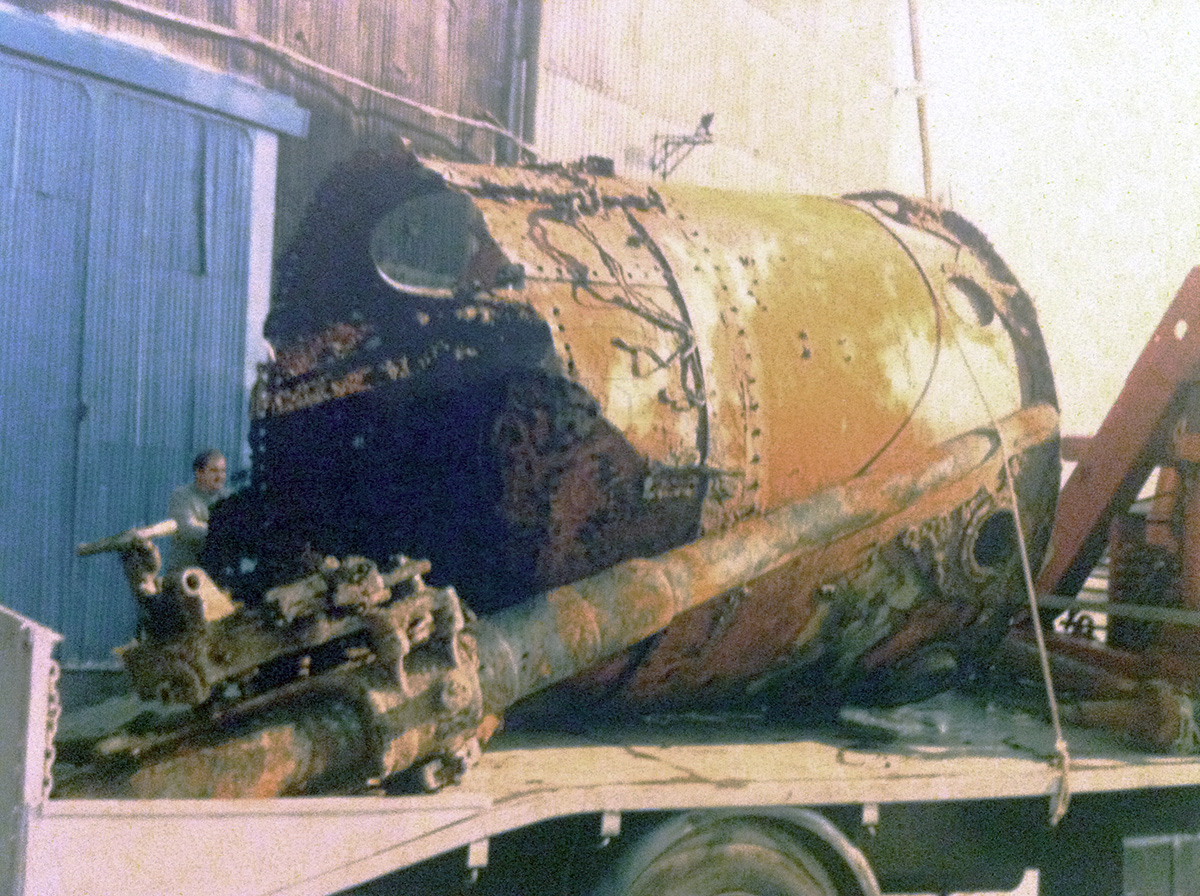 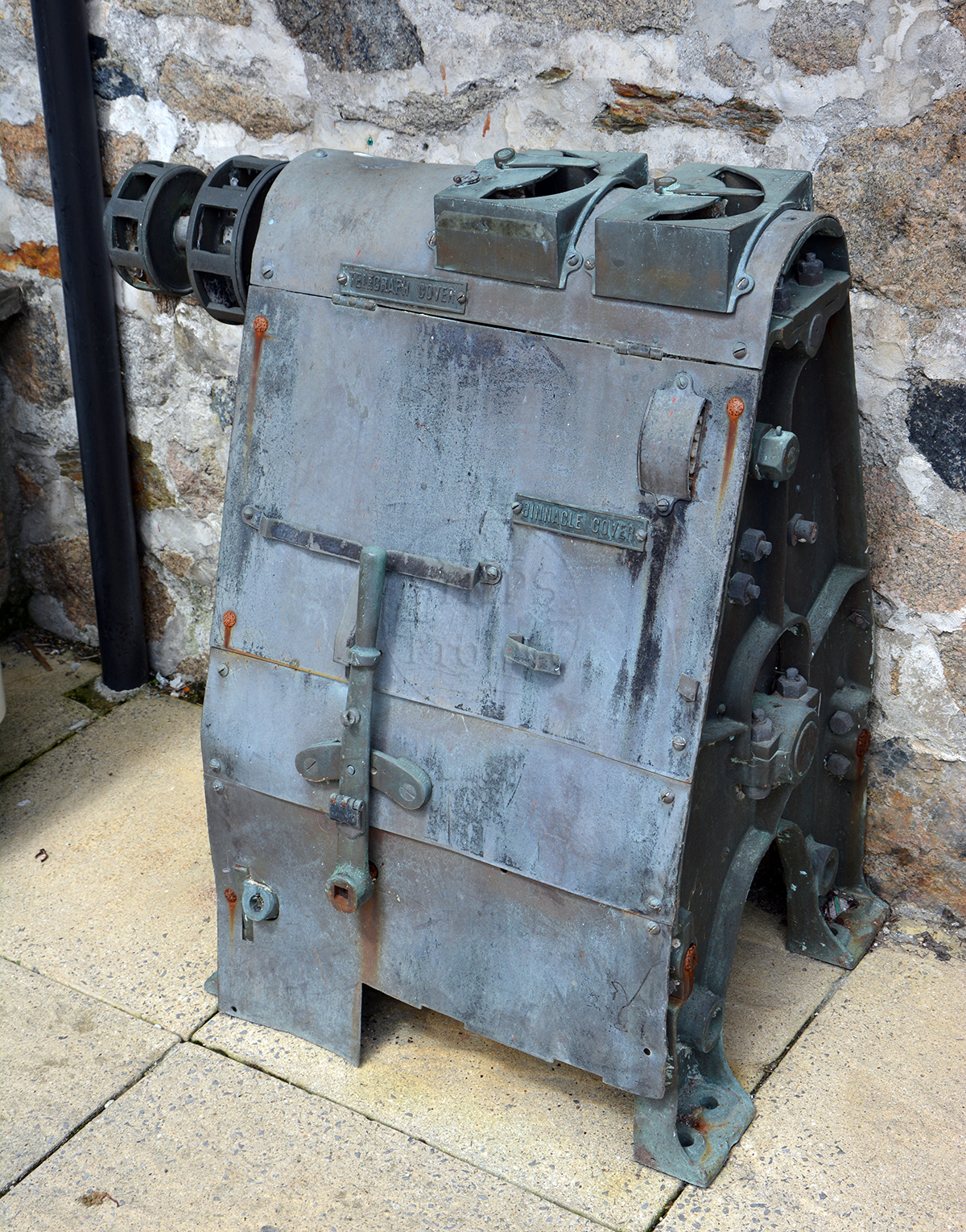 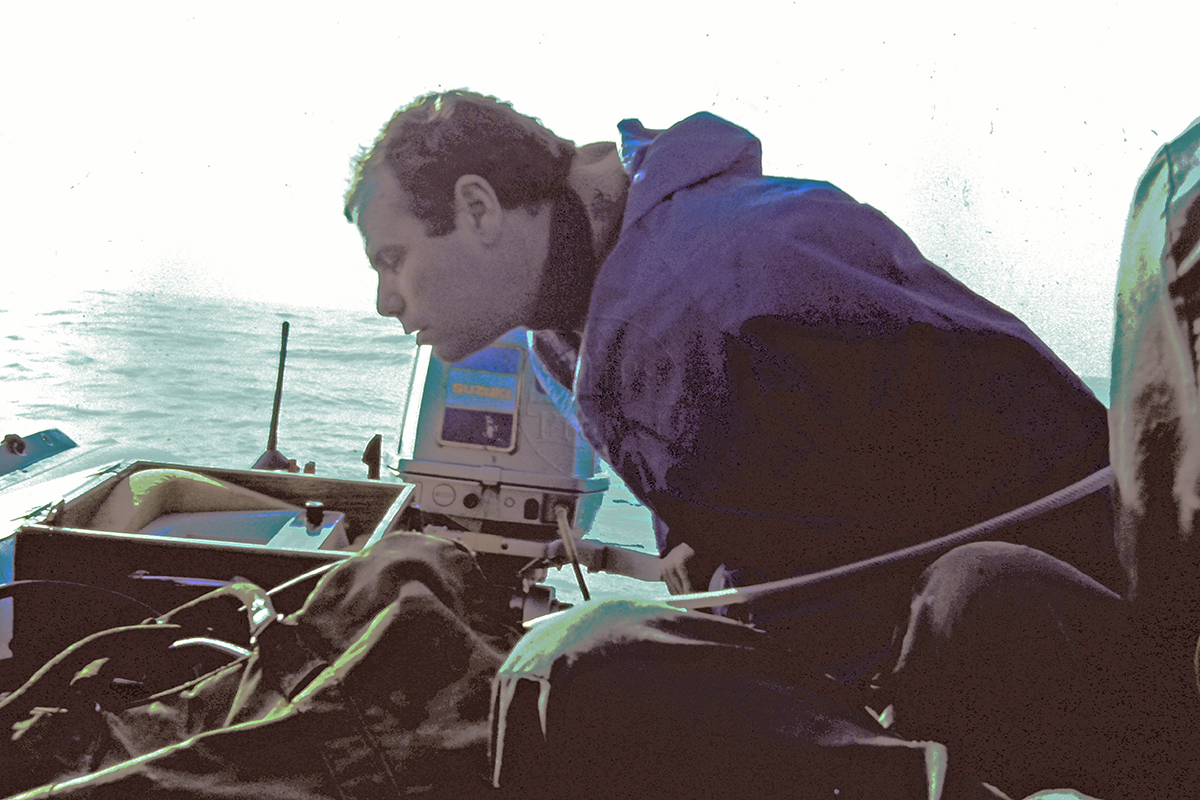 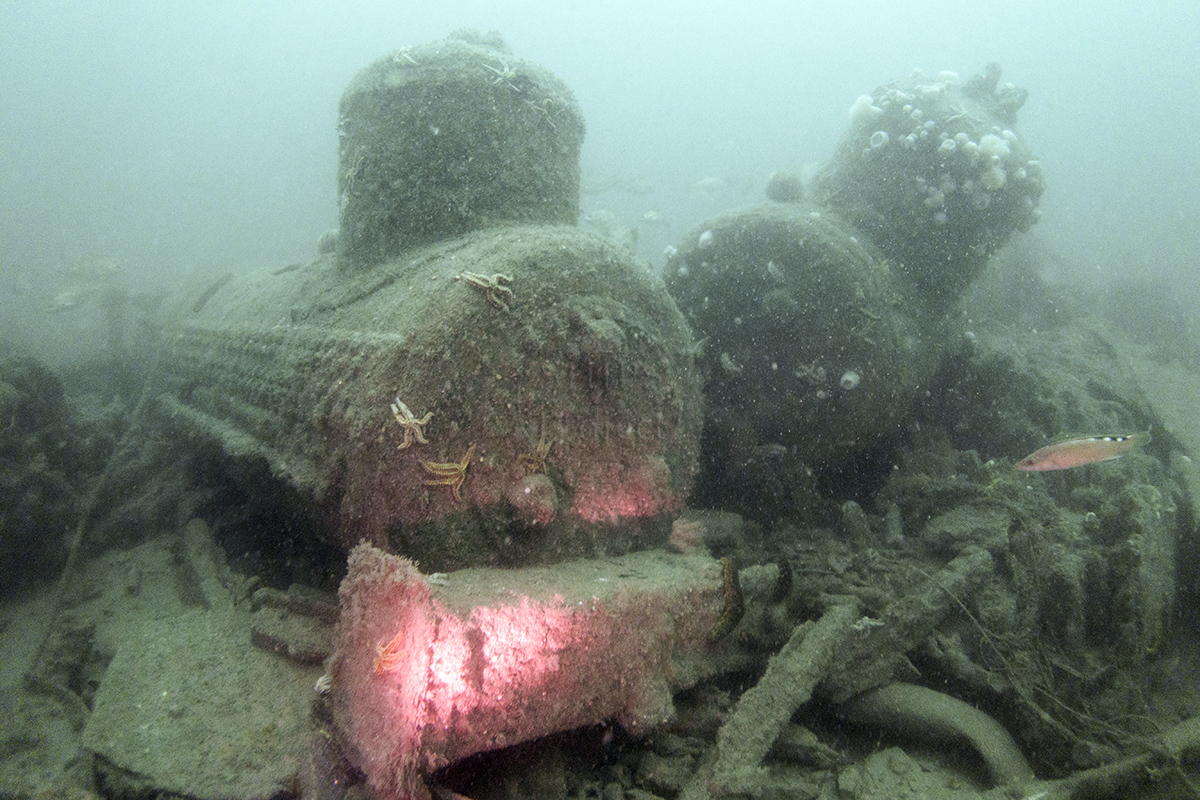 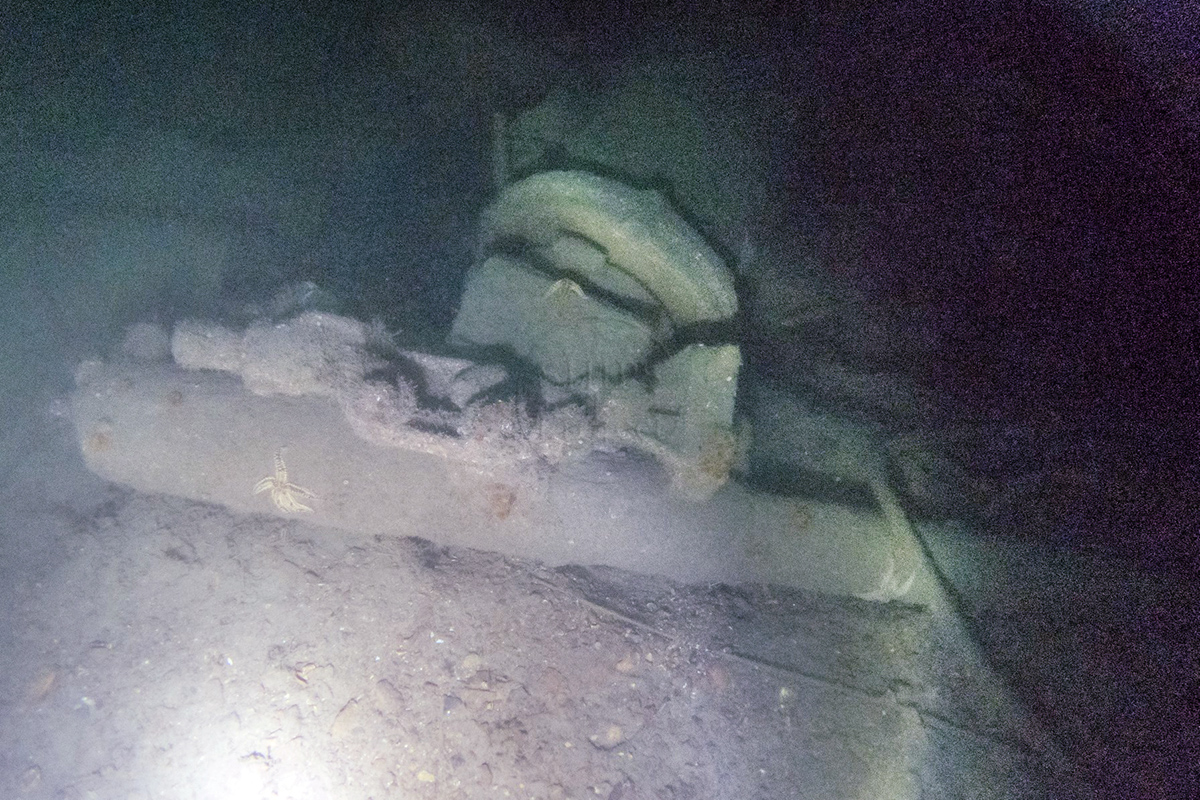