The remains of an unknown iron-hulled ship on the beach at Stonehouse, Plymouth.

The name and type of this vessel is unknown. Even in 1950 this information was not known to local residents so the vessel must have been abandoned some time before this date.

This ship has not been identified, but John Cotton was informed by residents that it was the remains of a WW1 submarine; the length suggests that this could be a British B or C class submarine however the arrangement of lower tanks in these types of vessels is absent from the hulk. A local resident who had worked at Davies & Cann scrapyard suggested this was a vessel associated with the Cable & Wireless company as it had a base in Stonehouse. There is a reference to a 'cable ship' at Stonehouse in a newspaper article from 1908 which may be related.

This would have been a significant feature on the foreshore at the time she was scrapped so it is hoped that we will locate a photograph of her in the near future. Any information about this ship or submarine would be appreciated, please send us a comment below.

This vessel was investigated by The SHIPS Project in 2020. The vessel has been run up on to the foreshore at high tide presumably to be scrapped, she lies with her bow to the east and is intact along her keel but her bow is missing. Almost all hull structure above the seabed has been removed so only the lower part of the vessel remains, to a maximum depth of 0.5m below seabed level, but the offshore end is better preserved than the shallower inshore end. The maximum length of the hull is 37m and the maximum remaining width is 5.8m, however the original vessel would be much wider.

The remains consist of rolled iron L section frames 42mm wide and 75mm high fastened 530mm apart over outer hull plating fastened using two rows of nine 3/4in diameter rivets. The plating is 35mm thick including concretion, the thickness of the remaining metal is not yet known. The remains of an engine bed lie in the middle of the hulk and some structural features can be seen aft.

The remains are a hazard to moored vessels so a set of moorings have been laid in and around the hulk to keep nearby boats away. A large mooring block has been placed just off the stern and a large steel mooring shackle lies in the starboard quarter with a set of mooring chains attached.

The shape of the hull, central engine mounting and absence of stern tube suggest that this may be a paddle steamship, but further investigation is required.

The beach can be accessed via the steps alongside the Royal William Victualling Yard, the mud is deep in places so wearing wetsuit boots is advised. Care must be taken when investigating this hulk as the foreshore is littered with her remains and other rubbish including broken bottles and sharp metal.

Nearby hulks include WWII minesweeper YMS-378

on the same beach.

'About 12 months later I was talking to a gentleman down at the shipyard that was beside the YMS. He can remember her coming in and berthing along side the wharf. He said that it was about early 1950’s and they have taken all the metal parts off and just left the wooden hull to rot. He also said that the steel plating that is just out from the minesweeper is the remains of an old submarine.'

Around 1950 they [sic] stood far above the mud to be quite a hazard to small boats. They stood about 18 inches above the mud and in August / September were good for the prawns. Older people said that they were the lower sections of submarines bought and scrapped by Cann & Company [Davies and Cann] after WW1. When the Stonehouse boat owners took a lease from the Mount Edgcumbe estate in the late 1960's the founding members Sid Nation, Ron Hallett, Don Curtis and others had a go at removing them but they were deeper then the above surface bits indicated so that area had for and aft moorings allocated to ensure a safe berth. 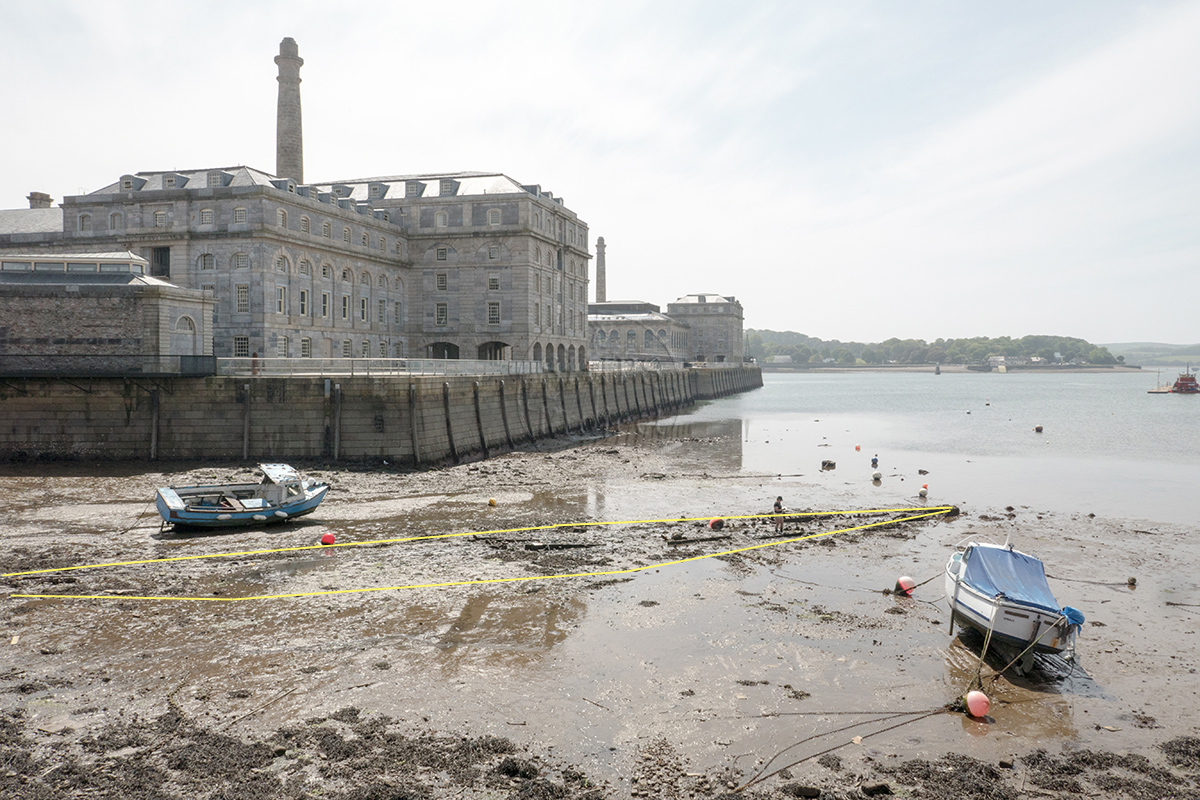 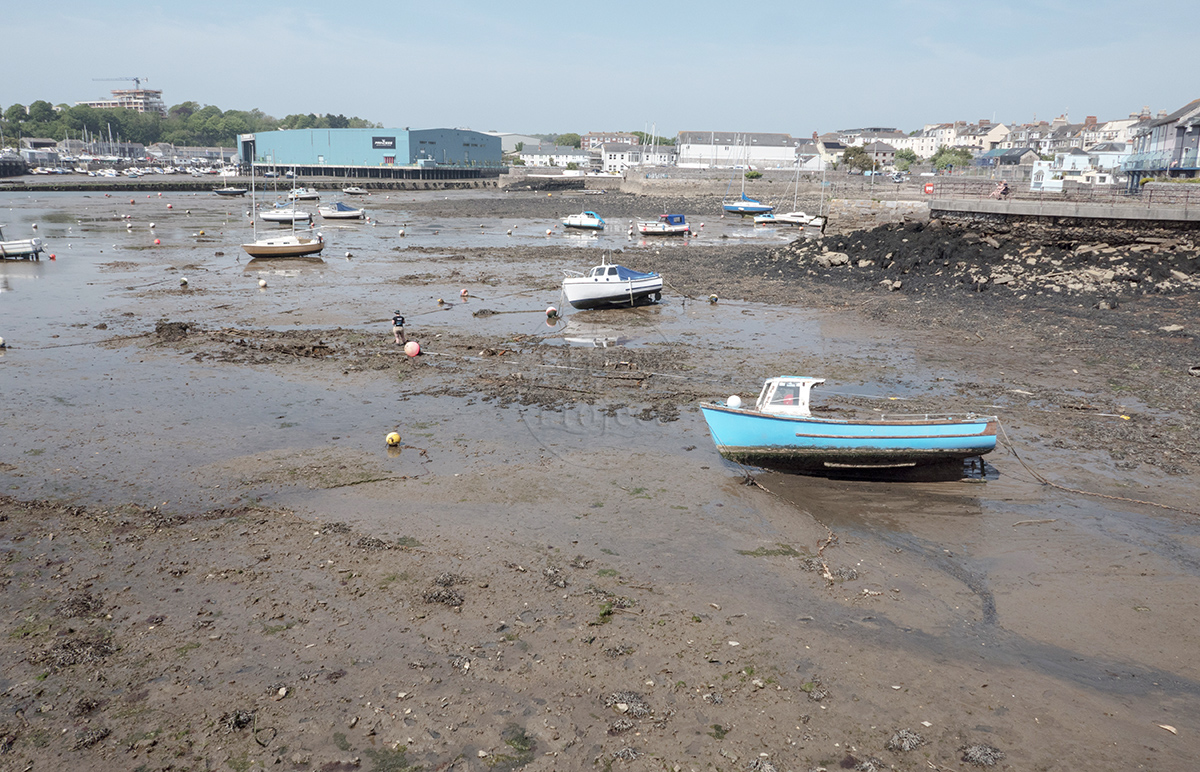 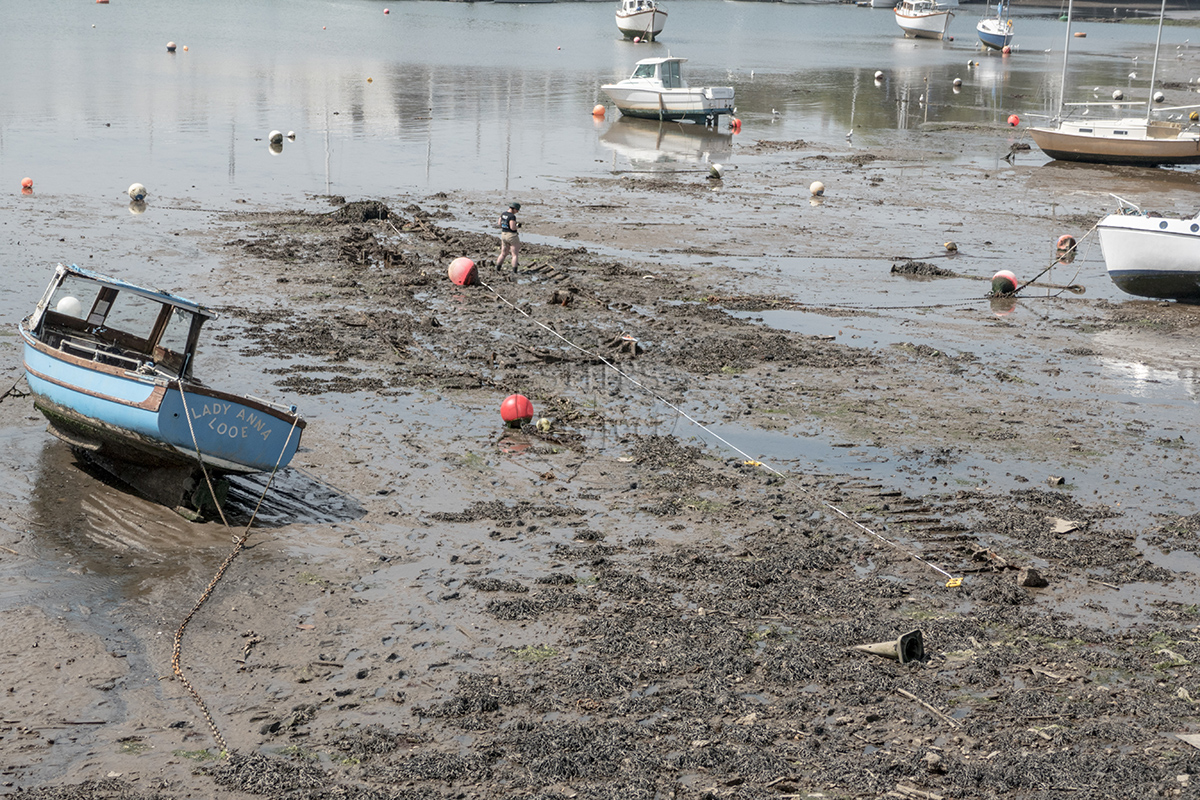 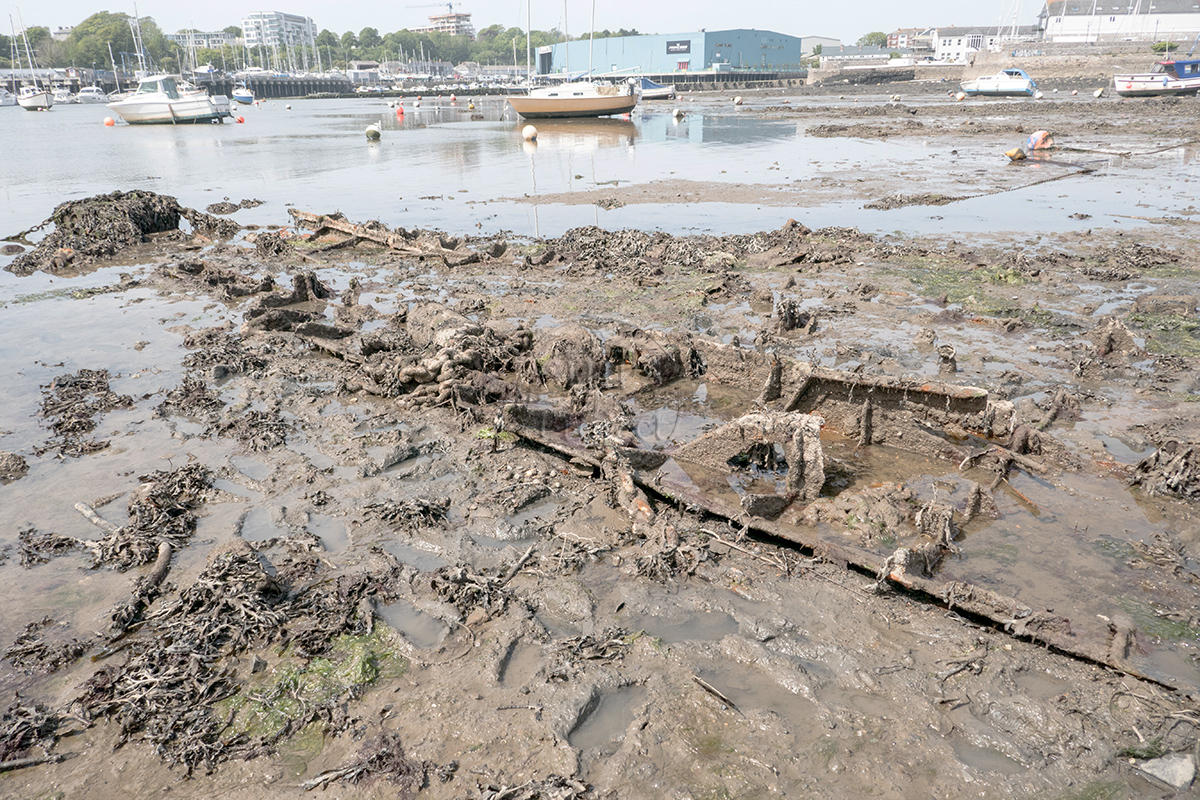 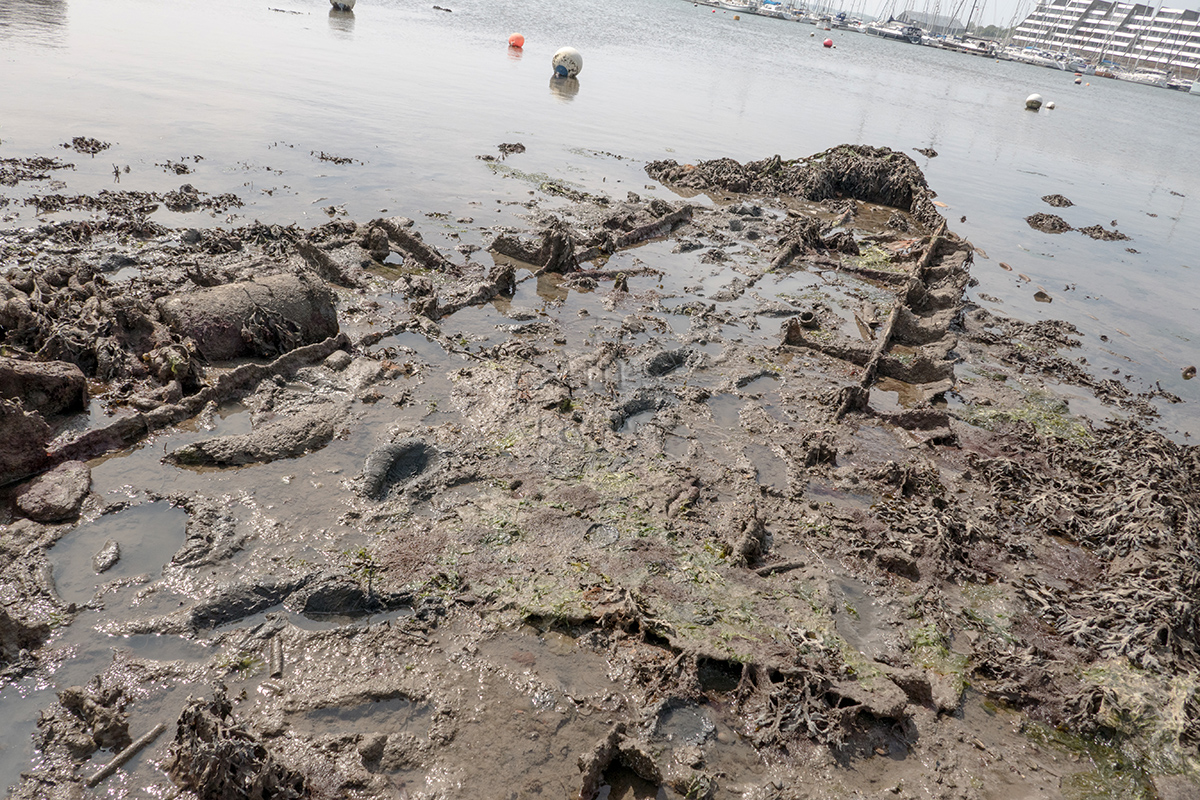 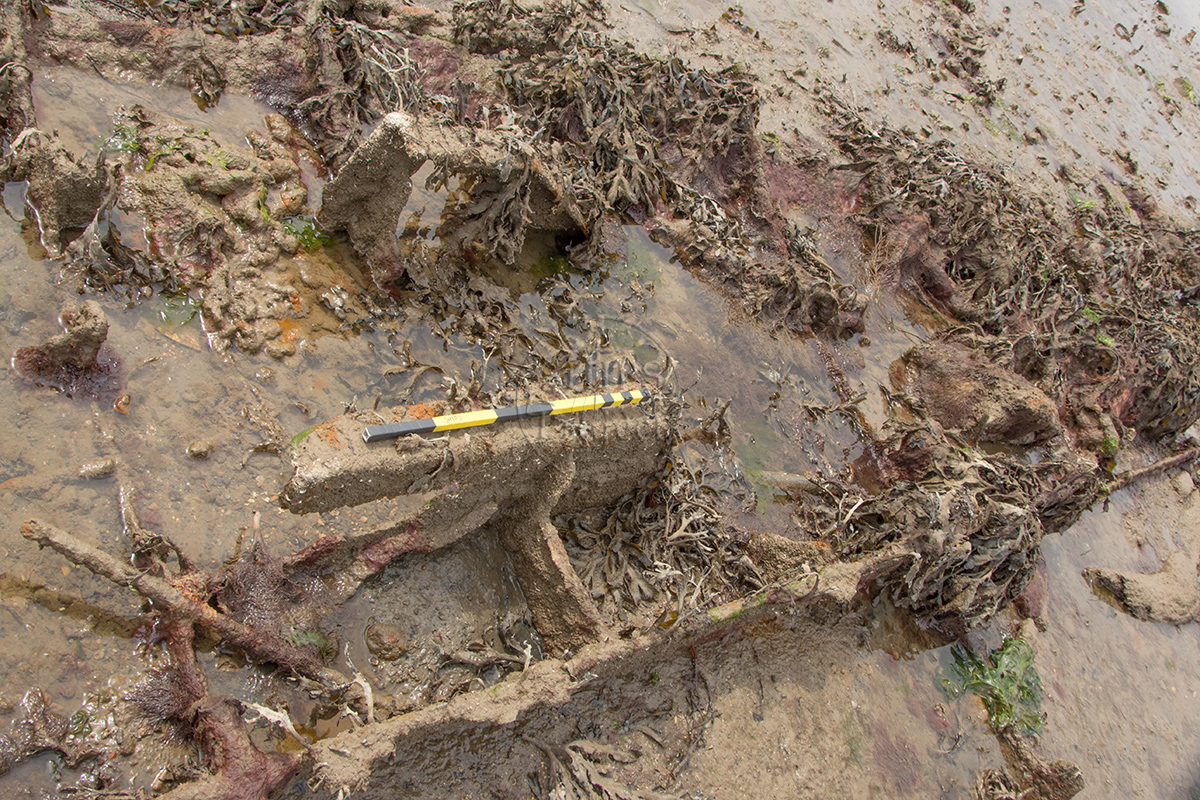